An exhibition of oleograph prints of Raja Ravi Varma in Ahmedabad

An exhibition of oleograph prints of Raja Ravi Varma in Ahmedabad
Ahmedabad, 28 September, 2010 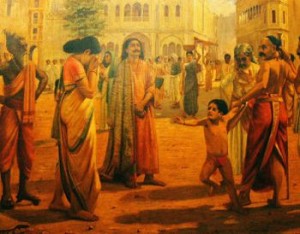 An exhibition of oleographs prints (a chromolithograph printed with oil paint on canvas) of paintings of Raja Ravi Varma (1848-1906) will be organized by Gujarat State Lalit Kala Academy and Mandhram house Bangalore during 1 October to 4 October in Ahmedabad’s Ravi Shankar Raval Kala Bhawan between 10.30 am to 7.00 pm.

Ravi Varma, who was born to Umamba Thampuratti and Neelakandan Bhattadaripad in the royal palace of Kilimanoor, showed his talent at a young age. He received the patronage of Ayilyam Thirunal Maharaja of Travancore when he was 14-years-old and was taught by the palace painter Ramaswamy Naidu. He was later taught oil painting by British painter Theodor Jenson. The power and forceful expression of European painting fascinated Ravi Varma, a style very much in contrast to Indian art work.

His paintings are considered to be among the best examples of fusion of Indian traditions with the techniques of European academic art. He is most remembered for his paintings of beautiful sari-clad women, who were portrayed as very shapely and graceful. He often modeled Hindu Goddesses on south Indian women, who he considered beautiful. He is particularly noted for his paintings of Dushyanta and Shakuntala and Nala and Damayanti, from the Mahabharata.

His exposure to the West came when he won first prize in the Vienna Art Exhibtion in 1873. After a successful career as a painter, Raja Ravi Varma died in 1906 at the age of 58. He is considered as one of the greatest painters in the history of Indian art. His paintings are on display at Jaganmohana Palace, Mysore, Art Galleries of Baroda and Thiruvanathapuram.

While painters abhor reproduction of their works, Raja Ravi Varma generously allowed oleograph prints of his work, to reach out to the common people.