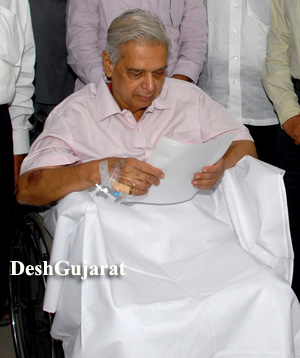 Shri Bhatt passed away in Ahmedabad’s SAL hospital where he was admitted on 21st of August.

Shri Bhatt was 71-year-old. Given above is Shri Ashok Bhatt’s last photograph when he conducted oath of newly elected Kathlal MLA.

Shri Bhatt’s body will be put at his residence(Kameshwar ni pol, Raipur chakla) between 7.00 to 9.00 am. His funeral procession will commence from here and proceed to Gujarat Assembly complex in Gandhinagar. The funeral procession then come to state BJP headquarter at Khanpur in Ahmedabad. Late leader will be cremated at Jamalpur’s Saptarshi cremation facility at around noon.