Rahul Baba grow up, and then visit Gujarat next time

Rahul Baba grow up, and then visit Gujarat next time
Ahmedabad, 28 November, 2010 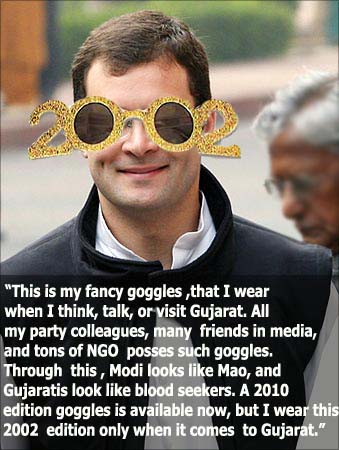 Rahul Gandhi’s Gujarat visit on 26 November didn’t invoke much interest. The visit was somewhat talked about, only because of Rahul’s hinted utterances against Narendra Modi.

It’s difficult to understand what Rahul achieves by carrying out such paratroop visits to Gujarat, and selective interaction with youths? Rahul’s 2007 Gujarat election road shows and rallies were much hyped in media, but in Surat, or in Vadodara, wherever he carried out party campaign, the BJP was victorious with thumping majority. Ditto in Bihar recently.

Not many youths who attended his Gujarat interaction functions of 26 November were impressed. The youths complained that Rahul’s answers on corruption, and Gujarat’s development related issues were not straight-forward, realistic and convincing enough. The youths say they don’t think Rahul has his own ideas on betterment of the country or society.

While main agenda of Rahul was to convince the youths that they should join politics, and they need no godfather or some relative in Congress party to go ahead, the point highly discussed among the youths was that Mr. Rahul himself is holding higher position in country’s politics today, only because of the fact that he is son of Rajiv Gandhi and Sonia Gandhi. Nobody has any doubt about the fact that Sonia became Congress President because she was widow of Rajiv Gandhi. Rajiv could become Prime Minister because his mother was Indira Gandhi. Indira could become Prime Minister because her father was Jawaharlal Nehru. Now when Rahul Gandhi come to the youths to tell them that they would get fair chance in politics according to their capacity, disregarding of the fact that whether they are relative or disciple of some big shot in the party, why one should believe him?

One of the worst things about Rahul’s Gujarat visit was that, he targeted popular Chief Minister Narendra Modi by comparing him with China’s Mao. Now how can one compare Modi with Mao? Did Mao fight elections and rule the nation? Modi has been victorious and re-elected three times with thumping majority within democratic framework of the nation. If Modi is like Mao, then who the Gujaratis are according to Rahul? Do Rahul believe they are like revolutionary Army-men of 1920s China?

Rahul said in Gujarat rich have become richer and poor poorer. Sorry to say that Rahul has no knowledge on ground reality of Gujarat. The seepage of development has been upto ground level here. If Rahul is not informed about recent Gujarat rural area election results by his partymen, then we should be sorry for the fact that he is dis-informed, but if Rahul has that information, then sorry for his illusion.

The most offending act of Rahul during this visit was his chanting of 2002 riot mantras. Rahul still sees Gujarat through the prism of year 2002 riot. If Rahul wants to chew and spit again and again that 2002 chewing gum, then he should first grow up and then come to Gujarat next time. Do we see Delhi through the prism of year 1984? Was there no riot in Gujarat before Narendra Modi? And would there be none after him? Were all riots in the world history happened under the area ruled by Narendra Modi? Did Narendra Modi’s entire 9-year-long term witnessed riot everyday? Will paratroopers like Rahul continue to come to Gujarat and talk nothing else but 8-year-old riot?

Rahul’s 26 November visit only proves that he is a political extension of Teesta Setalvad. In Rajkot, he told the students that he understands Gujarati. But the sad part is that Rahul does not seem understanding Gujarat enough. And the 2002 prism that he has adopted to look at Gujarat, would not allow him to see anything but a bunch of rioters who elect Mao!

Next time grow up, and then visit Gujarat Rahul.