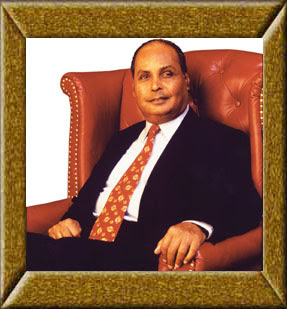 Dhirubhai Ambani, though known for his vision, business acumen and skills, is also referred to as a philanthropist in close circles. Those who knew him would testify that Dhirubhai simultaneously lived a parallel life of a real time philanthropist. The amount of charity he did can never be estimated. He (and for that matter each member of Ambani family) believed in Kabir’s adage, ‘Neki kar aur kue mein daal’ ( do deeds of charity and forget). It is an Indian ethos that ‘left hand must not know what the right hand gave.’

At the same time, Dhirubhai’s interests and intentions to do something for the society at a sustainable level are evident from the institutions he permitted to be set up during his lifetime. The activities of Dhirubhai Ambani Foundation for brilliant students at grass-root level, Reliance Rural Development Trust, Observer Foundation, etc are examples of an intangible societal contribution he made.

While charity refers to relief from suffering, philanthropy is the seeking out the root causes of social problems and solving them. Philanthropy, no doubt, was close to Dhirubhai’s heart; as I am witness to it since 1995 till he breathed last on this day in 2002. The concern he’d shown for the sufferers during 1998 cyclone in Jamnagar and 2001 earthquake in Kutch need hardly any emphasis. The generosity, with which he ordered his men to exhibit austerity and supply water for people of Jamnagar 30 kilometers away, lay exclusive pipeline and chlorination etc during water scare years of 1999, 2000, 2001 etc will go a long way in history of philanthropy by Indian industrialists.

One can imagine an innovation in granting a scheme to maintain cows of 14 villages since 1995, the day he determined to set up the refinery complex. He knew well that the villagers of semi-arid region of Jamnagar district would certainly have the welfare of their cows closer to their hearts while parting their land for the industry. The village development activities around Jamnagar refinery, development of Dwarka for pilgrim, etc owe its legacy to Dhirubhai Ambani. Though Dhirubhai steered and guided the course of charitable and philanthropic deeds, he himself never said he did this and he did that. We can only say about him in George Elliot’s words that: “blessed was the man who having nothing to say, abstained from giving wordy evidence of the fact.”