Dinesh Trivedi to be honored at native place in Gujarat 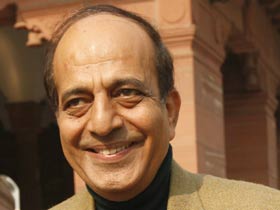 Central Railway minister Dinesh Trivedi will be honored at his native place Bidada in Kutch district of Gujarat.

Trivedi, originally a Kutchi settled in Calcutta announced number of trains for Gujarat and Kutch in Railway budget. He is being honored for self-respect and patriotism he demonstrated as a union minister.