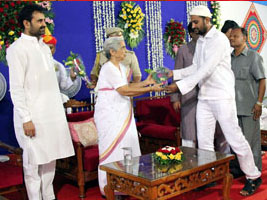 Gujarat governor Kamla Beniwal allegedly exerted political pressure to save the society from dissolution due to irregularities.

According to the Registrar of Cooperative Societies, Jaipur, Beniwal influenced the Ashok Gehlot government to drop the proceedings for dissolution of the Kisan Samuhik Krishi Sahkari Samiti Limited in 2010.

The samiti has claimed that Beniwal was putting in 14-16 hours of physical labour every day to develop the land allotted to it in Jhotwara.

Congress is believed to have asked the state government to hold an inquiry into the allegations against Beniwal.

In his order dated May 2 – a copy of which is with Economic Times – the registrar quoted the inquiry report submitted by its officer in 2005, pointing to a long list of irregularities on part of the samiti.

These include diversion from the samiti’s main objectives, surrender of 384 bigha land to the Jaipur Development Authority without the consent of the registrar, not holding the annual general meeting for over 20 years and failure to audit the society’s accounts between 1981 and 2009.

Though the registrar, based on these irregularities, recommended dissolution proceedings against the samiti in 2009, the recommendation was overturned by Rajasthan cooperative minister Parsadi Lal Meena, allegedly under Beniwal’s influence.

Meena, in an order dated September 9, 2010, set aside the inquiry report, besides dismissing the registrar’s recommendation under Section 55(5)(6) of the Cooperative Act to dissolve the samiti.

The samiti had claimed that Beniwal and its other members had been putting in 14-16 hours of extreme physical labour since 1958 to develop the 384 bigha land allotted to the society in Jhotwara. The registrar’s order, however, dismisses these claims as false. “From the status of each member, it cannot be expected that they will ever do any physical labour, what to say of 14-16 hours per day,” the registrar has pointed out.

The members had sought to be compensated for their physical work over the past 58 years, with plots of 1,516 sq yards each in Jaipur city, where the market value of each plot is nearly Rs 3.49 crore. The samiti has, however, valued each of these plots at an extremely modest Rs 12,12,800.

The registrar has also faulted the samiti for giving consent to acquisition of its land by the Jaipur Development Authority without permission of the government or the registrar, as required by the rules. The samiti demanded developed residential and commercial plots from the JDA in lieu of compensation, “which shows the malafide intentions of the samiti members”.

Beniwal has been linked to several specific allegations. To begin with, she accepted executive membership of the samiti on May 25, 2011, when she was the governor of Gujarat. The samiti did not approach the registrar’s office or the state cooperative department for endorsement of her name in the executive body, as was legally required.

Secondly, during a meeting of the samiti’s executive body on January 1, 2012, she helped pass several illegal resolutions. The registrar, in its order, slammed the resolutions, saying that the samiti did not have the power to receive compensation from the JDA in the form of residential and commercial plots, or to engage in sale and purchase of plots received by it towards compensation.

The registrar further noted that, apart from the KSKSSL, none of the nearly 60 group and joint agricultural cooperative societies engaged in joint farming in Jaipur had surrendered their land to the JDA.

Finally, the registrar raised the question as to whether Beniwal had declared the Rs 20 lakh loaned by her to the samiti in her income-tax returns.