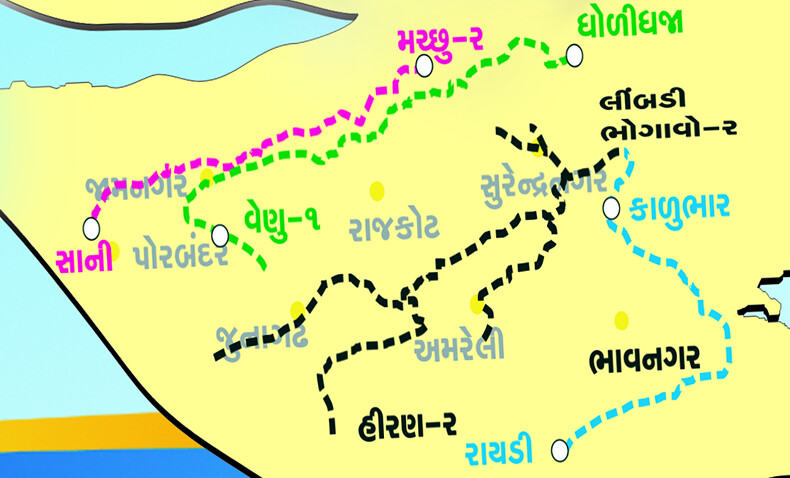 Saurashtra Jaldhara Trust, an organization active for last fifteen years in Saurashtra region for water conservation works has organized a very big event that aims to gather five lakh people from 4800 villages of Saurashtra region of Gujarat on 5 May near Bhadar dam in Devla gam of Gondal taluka.

Sharing the details of this programme, Surat based Shri Mathurbhai Savani, President of Saurashtra Jaldhara Trust said the event has been planned to create awareness about Saurashtra Narmada Jal Avataran (SAUNI) project.

He said Saurashtra’s all talukas will be given ‘Jal Avataran Kalash’ one month before the programme. Mitti of taluka’s all major rivers and dams will be filled in this pot along with Hanumanji’s Sindur from all villages. 51 pairs from each of the 4800 villages will participate in Mahayagna without paying any charge. On 3 May, 4800 cars will depart Surat to reach Narmada Jal Kalash Yatra.

On 5 May, each taluka’s all villege people will attend the event with kalash of their own taluka. Lakhs of people will worship Klash and pray for complete removal of water problem. After the programme, Kalash will be given back and they will be set up at some major mandir of respective taluka. Whenever Narmada water will reach through canal to river or dam of taluka, Kalash will be released in that water.

The entire event will be useful to create awareness about water conservation, drip irrigation, removal of unused bore wells, Narmada water in Saurashtra and Kalpasar project.

Surat has presence of someone or other from 4000 out of total 4800 villages of Saurashtra. An organizing committee of 10,000 people has been formed with two persons representing each of the 4,000 villages. More an 11-member committee has been formed in each of the 4,800 villages of Saurashtra. In total 55,000 village and taluka level leaders are actively working to ensure participation of maximum people. 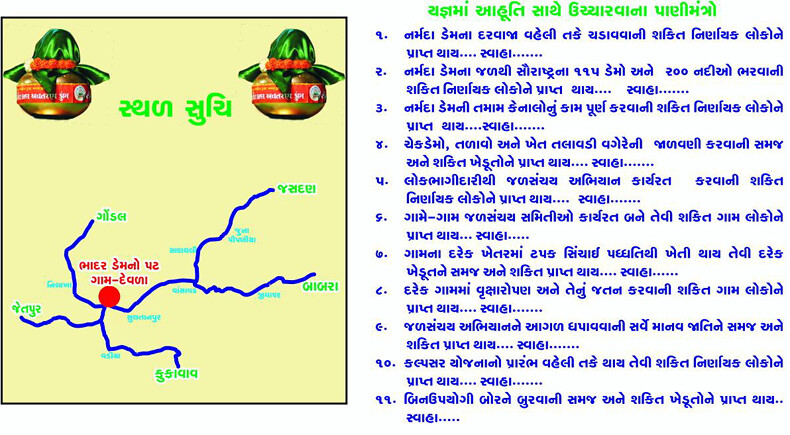 Location of May 2013 grand gathering 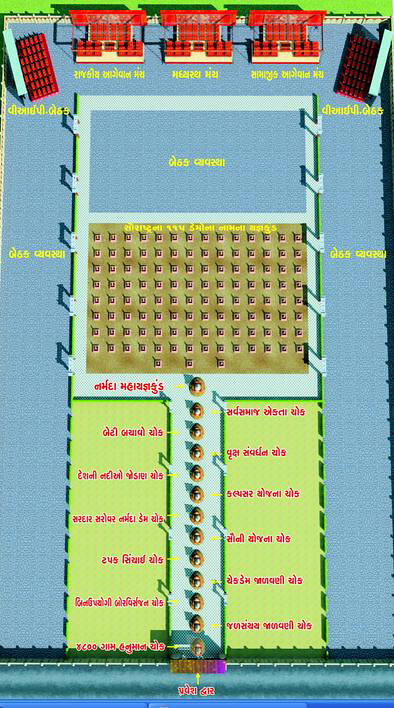 Map of the venue of grand gathering

Ahead of the Gujarat assembly polls last year, Gujarat Chief Minister Narendra Modi had announced ambitious plan of filling surplus water of Narmada to 115 dams of Saurashtra region in Gujarat.The ambitious Rs 10,000 crore scheme was named as ‘Saurashtra Narmada Avataran Irrigation Yojna’ (Sauni yojna). Shri Modi made announcement to supply one million acre ft water to Saurashtra region.Modi said the government officials and consultants worked for one and half year on this project. He said this scheme was very special because it would continue to add value to lives of the people of Saurashtra for next 100 years.He said in the next five years, he will not only focus on SAUNI project, but will also kick start the Kalpasar project.Modi announced his plan to hold conventions of farmers at 115 dam sites to honor goddess Narmada and added that each convention would be attended by minimum 10,000 farmers. Later in February 2013 the Gujarat government in its budget for year 2013-14 announced Rs 1,000 crore for SAUNI yojana for one year. As per the budget announcement, Narmada water will be filled through gravity in 115 dams of seven districts by 1,115 km long link canals of all the four zones. The four links include, Link-1: Matchu-2 to Sani; East Saurashtra, Link-2: Kalubhar to Raydi, Link-3: Dholidhaja-Venu; central Saurashtra, Link-4: Bhogavo to Hiran-2, south Saurashtra. The dams which will see replenishment include 30 dams in Rajkot, 28 dams in Jamnagar, 13 dams in Junagadh, 09 dams in Amreli, 05 dams in Surendranagar and 04 dams in Porbandar district.

A video film on SAUNI scheme