The last article was about details of foreign funding to Shabnam Hashmi’s NGO ANHAD. In that article we mentioned that one of the founders of ANHAD was Mr. Harsh Mander, a former IAS officer and Action Aid India man.

According to Wikipedia page, Harsh Mander was a signatory to the campaign to save Afzal Guru, a terrorist convicted and later hanged for the 2001 Indian Parliament attack. Mander also supports the demand for removal of the Armed Forces (Special Powers) Act, 1958 from Kashmir and North-eastern states. Harsh is convener of the drafting committee for the Communal Violence (Prevention) bill. Harsh Mander applied for mercy to Pakistani terrorist Ajmal Kasab courting a huge controversy.

Wikipedia page further tells that Harsh became member of National Advisory Council of the UPA government in 2010 and special commissioner to the Supreme Court.He was removed from the NAC in 2012. He worked formerly in the Indian Administrative Service in the predominantly tribal states Madhya Pradesh and Chhatisgarh for almost two decades.

In year 2011-12, CES received Rs 7,55,17,631.25 foreign funding. As per CES’s submission before government’s concerned department, justice for victim in states including Gujarat was one of the cause for which foreign fund was received and utilized. Research and homes for street children were other works for which money was received and spent in Gujarat area.

As Gujarat is involved somewhere, we are covering Harsh’s Delhi headquartered CES in our series. 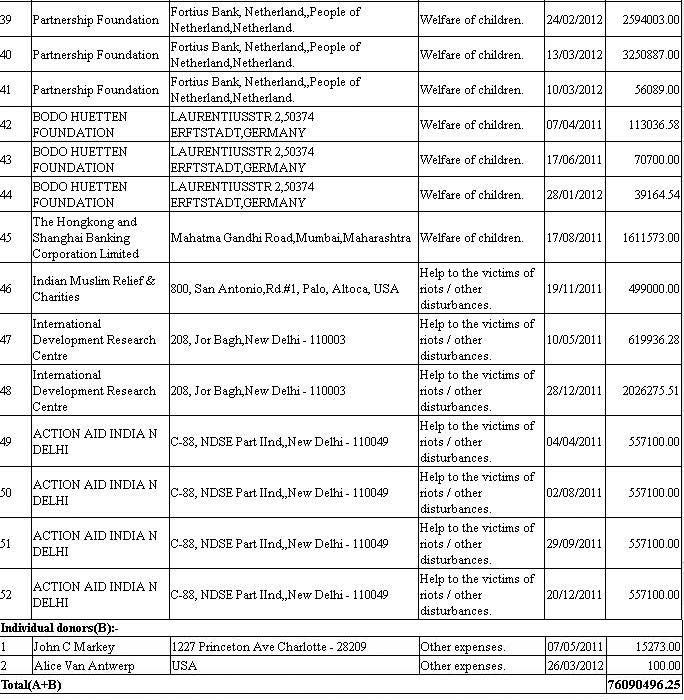 Then CES has received nearly Rs 90 lakh are as donation from Denmark based Christian organization DAN Church AID.

Rs 10 lakh received from America based Association for India’s Development(AID). This organization called AID also supports Medha Patkar in her Narmada movement and anti-Delhi Mumbai corridor movement. AID supported the movement to free Binayak Sen who was allegedly connected to Naxals and therefore jailed, but released later. Arvind Kejriwal is AID Saathi. What is AID Saathi? Well, AID recognizes certain activists in India with “Saathi” awards and support them in a manner that allows them freedom to operate without the constraints of a specific time-bound project. The program creates a mutually enriching relationship between AID and the Saathi and entails not only support in the form of a stipend, but also non-monetary involvement and strategic support from AID volunteers.

Germany’s BODO Huetten Foundation which works with children in education sector is another donor. Action Aid India is ofcourse at Mr. Mander’s help. International Development Research Centre – another donor to CES is headquartered in Canada. Members of IDRC’s Board of Governors are appointed by the Government of Canada.

One interesting source of donation is the Hong Kong and Shanghai Banking Corporation Limited (HSBC) – the bank that was in news for alleged dubious money transfers. 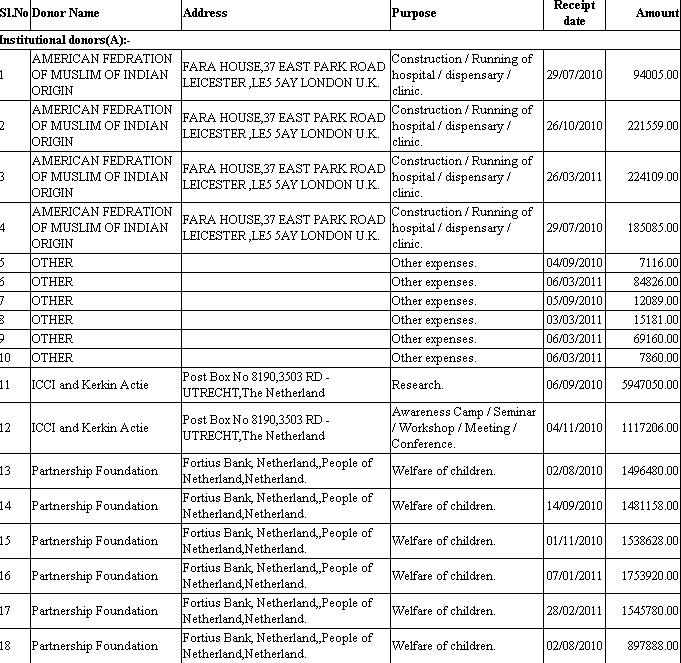 Partnership Foundation is ofcourse the top donor. IDRC also there. Then there’s an organization called Sangat which is based in Bradford, UK. American Federation of Muslims of Indian Origin is another donor of CES this year with less than Rs 10 lakh donation.

Then there’s again a Church. One NGO ‘ICCI and Kerkin Actie’ has donated around Rs 70 lakh in a year to Mr. Mander’s NGO for research, seminars and other activities. Kerkin Actie (in Dutch) means Church in Action.

Concluding – in two years Mr. Harsh Mander’s one NGO CES received Rs 123335139.36 fund from abroad. We don’t have any detail about locally sourced funds of CES.