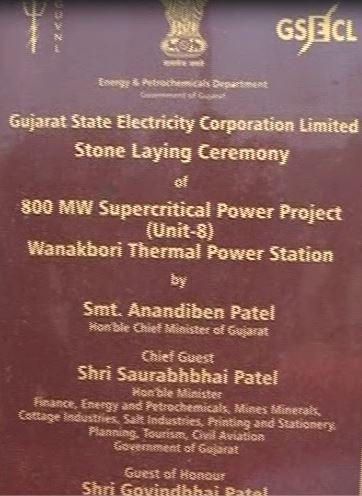 GSECL had signed the EPC contract with BHEL in December 2014. The estimated cost of the project is Rs 4,465 crore. The project is expected to be completed by the year 2018-19.

Incidentally this is the highest valued order that has been placed by GSECL.

On the occasion, the Chief Minister said, “If we need to progress as a state in the field of industry, technology and agriculture, abundant supply of power to run machines is a pre- requisite. The quantum of power supply in a state defines the state’s ability to support industrial, agricultural and technological progress.’

Emphasizing on the need for this power plant, state energy minister Saurabh Patel said, “We are looking to increase the power production in the state as part of our plan to push for more industrial units. If we provide power at affordable rates, then more industries will start coming to Gujarat. Once we are able to generate power at a relatively lower cost, we can pass on the benefit to the consumers. This super critical power plant will be the first of its kind in the state.”

GSECL Chairman L Chuaungo and MD Gurdeep Singh shared that the power plant would meet the electricity needs of rural areas and generate more for everyone. The plant was being set up with a high degree of
indigenous approach.