In the 9th annual Indo-Japan summit talks, Modi and Abe will review implementation of various decisions taken in course of last one year to enhance economic ties, particularly in the trade and investment sector.

The summit meeting will be held on December 12 and Abe is likely to visit Varanasi, the Parliamentary constituency of Modi, on the same day. 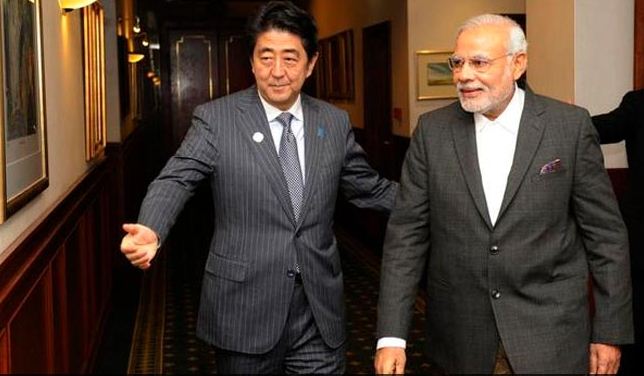 At the last Summit meeting held in Tokyo last year, the two prime ministers had agreed to elevate the relationship to “Special Strategic and Global Partnership”.

Modi had visited Japan from August 30 to September 3 last year during which that country had announced doubling of its private and public investment in India to about USD 34 billion over a period of five years.

During the summit talks last year, Modi and Abe had agreed to enhance defence and strategic cooperation to a new level and also decided to speed up negotiations on civil nuclear deal.

While agreeing on greater defence equipment and technology cooperation, the two sides had decided to expedite discussions on modalities for the sale of Japanese US-2 amphibian aircraft.

India and Japan have been expanding their economic and strategic engagement in recent years resulting in cooperation in a vast swathe of fields including defence and security.

The economic engagement witnessed significant rise after both countries signed a a Comprehensive Economic Partnership Agreement (CEPA) in 2011.

Elaborate security arrangements have been made for the scheduled visit of Prime Minister Narendra Modi to his constituency Varanasi on December 12 with Japanese counterpart Shinzo Abe.

“As per the tentative programme of Prime Minister, he will be reaching Varanasi by air at about 3 pm and will leave for New Delhi on the same day after attending Ganga Aarti at Dasaswamedh Ghat,” IG, Law and order, A Satish Ganesh said.

“We are yet to receive minute to minute programme of the PM. But as per his tentative programme besides Aarti, he will be meeting prominent personalities/dignitaries over dinner.

The list which is not yet finalised,” Ganesh said.

He said that a team of Navy has been sought for water safety.

About the security arrangements, Ganesh said that state Home department has asked for 15 companies of Central Paramilitary Forces (CPMFs) from the Centre.

“Besides CPMFs, there would be eight officers of SP rank, 11 DSPs, 600 constables and six company of PAC,” he said adding that a video conferencing to review the security arrangement was held on December 3.