Railway Minister Suresh Prabhu today launched a free high-speed public Wi-Fi service in collaboration with technology giant Google at Mumbai Central here, the first station in the country to get such facility.

Terming the facility as “world class”, Prabhu said around 100 busiest stations across the country will be brought under the free public Wi-Fi service by this year-end, making it the world’s largest such project.

“When I proposed the full-fledged (Railway) budget last year, I had vowed to improve ailing condition of Indian Railway, and launching free Wi-Fi at Mumbai Central Station is one giant step towards improving the Railway,” Prabhu said while addressing the gathering comprising senior railway officers, Google executives and passengers at the suburban railway station. 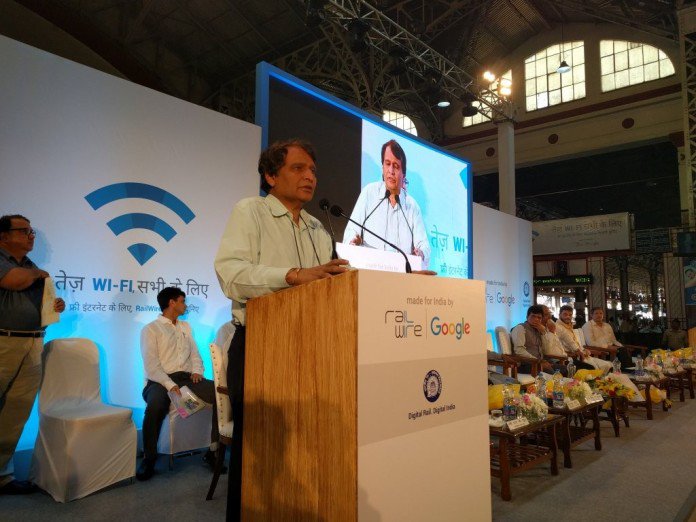 Terming it as a “historic day”, the minister said that his government was trying hard to develop sustainable infrastructure and to improve safety and security of the passengers and bring financial stability to the entity.

The project of providing free Wi-Fi connectivity at 400 railway stations across the country was announced last September during Prime Minister Narendra Modi’s visit to the Google headquarters in the US.

“Bringing affordable Internet access to millions of people is an important part of making internet both easily accessible and useful for more than 300 million Indians who are already online, and the nearly one billion more who are not,” he said.

Anandan said that over one crore people will be able to enjoy this experience at 100 stations spread across the country by this year-end.

“The network is built for wide coverage and high capacity usage unlike a typical Wi-Fi hotspot which offers connectivity in limited area and poor experience. This network will extend to cover both long distance train station and the local train station in Mumbai Central,” he said.

In a statement issued later, Google said the four stations where free Wi-Fi facility would be provided soon are Allahabad, Patna, Jaipur and Ranchi, and other stations will follow very shortly.