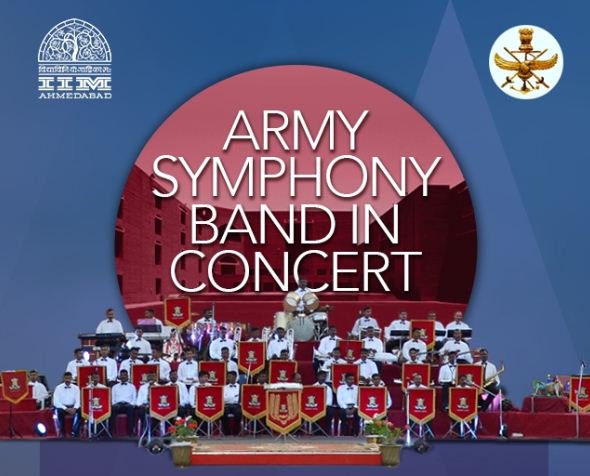 The Indian Army (MADRAS Regiment) Symphony Band was raised in 1951 as a brass band at Wellington and has evolved over the years to its current form. In order to add variety to the music, Indian classical music instruments like santoor, sitar, tabla were also incorporated with the military band.

Prof. Shailesh Gandhi, Dean Programmes at IIMA said, “We are thankful to the Indian Army (MADRAS Regiment) Symphony band which has the unique privilege of performing during the visits of various foreign dignitaries to India at the Rashtrapati Bhawan and during national level functions like Republic Day, Independence Day and Beating the Retreat ceremonies, for performing at IIMA and to RBL Bank for supporting this positive initiative.”

The Army Symphony Band consists of three sections–the Wood Wind Section comprising flute, piccolo, oboe, clarinet, saxophone and bassoon. The tone is produced by a column of air vibrating with a pipe that has little vents on its side.

The Brass section comprises the horn, cornet, trumpet, trombone, euphonium and tuba. These instruments are indispensable for melody, sustaining harmony, rhythmic accent and for the weight of their massive tone.

The Percussion section has a variety of instruments that are made to sound by striking or shaking. The glockenspiel, xylophone, chimes, drum, and several others make up this section.