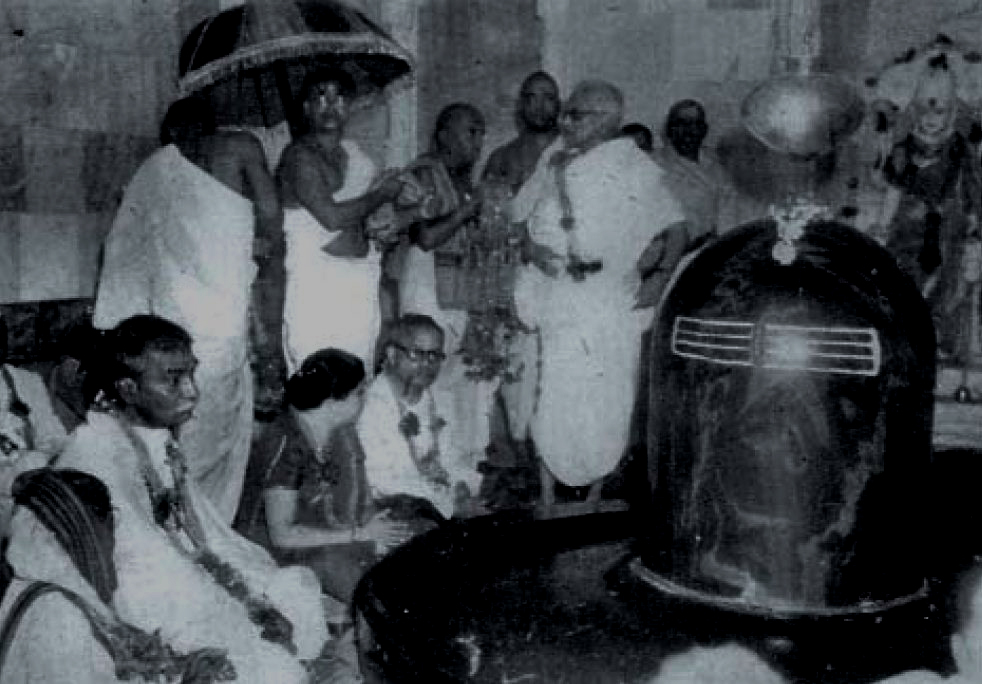 It was this day in year 1951 when then President of India Dr. Rajendra Prasad installed the idol of Somnath in the Somnath temple in Prabhas Patan town of Gujarat. The installation ceremony took place in presence of Shri Kanaiyalal Munshi, Jam Saheb of Jamnagar, Saurashtra State Chief Minister Dhebarbhai among others.

Shivalinga was earlier placed over Brahmshila. The duration of mahurat(auspicious time for installation) was just one ‘pal’ (moment). Shifting and placing a two-tonne Shivalinga would take time and Mahurat moment would be missed. Therefore, a golden shalaka was kept between Shivalinga and Jaladhari(base). Right at the prescribed mahurat moment, this shalaka was pulled out by Dr. Rajendraprasad for installation of Shivalinga. The installation ceremony was conducted by Lakshman Shastri Joshi’s Guru Sanyasi Shri Kevalanand Saraswati. 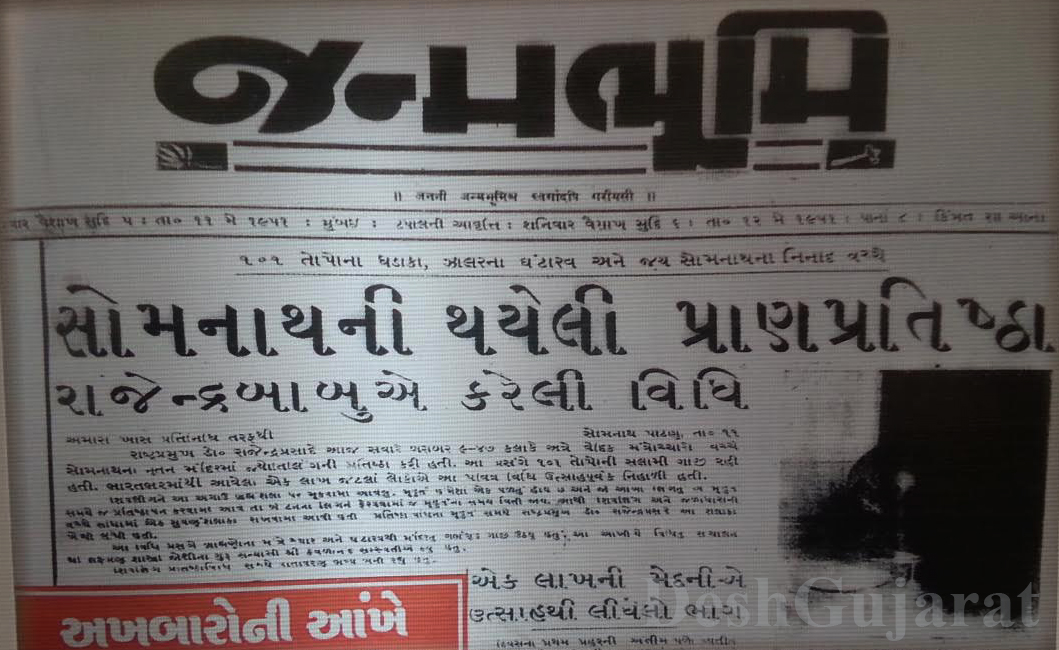 Installation ceremony of the Somnath deity was to be performed by Sardar Vallabhbhai Patel on Maha Shivratri day, 9th of March, 1951, but due to Vallabhbhai’s sad demise in Mumbai in December 1950, the ceremony was first postponed to April 7 which was a Hindu new year day in Gujarati Hindu calendar month of Chaitra.

However installation ceremony was further delay and it could take place on 11th of May  1951, which was Vaishakh Sud Pancham as per Gujarati Hindu calendar. 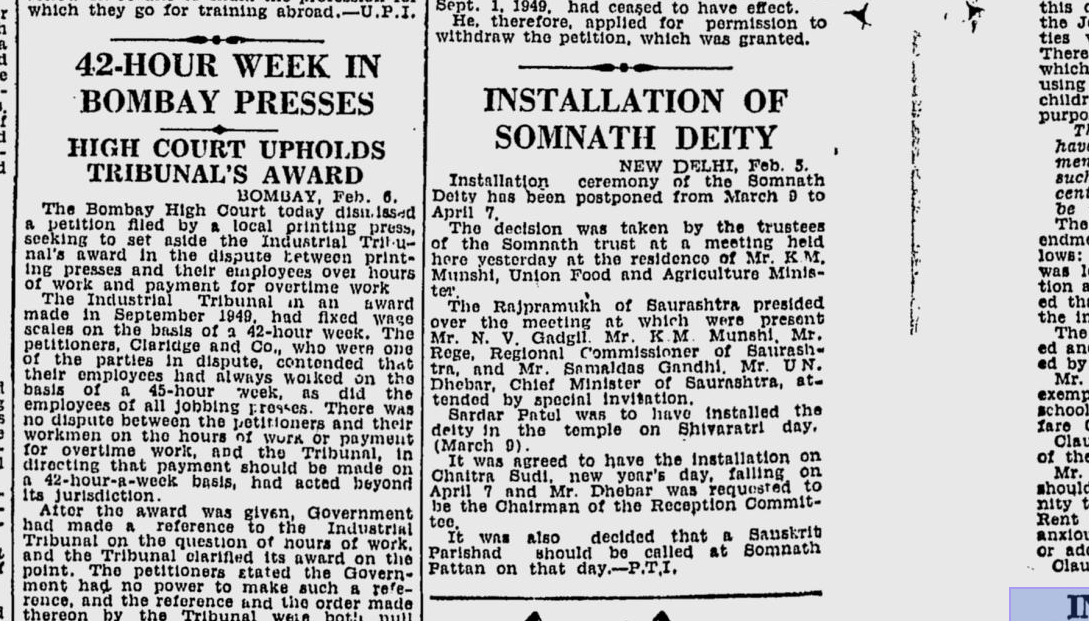 A PTI report published on February 8, 1951 reads: New Delhi, February 5. Installation ceremony of the Somnath Deity has been postponed from March 9 to April 7. The decision was taken by the trustees of the Somnath trust at a meeting held here yesterday at the resident of Mr. K M Munshi, Union Food and Agriculture Minister. The Rajpramukh of Saurashtra presided over the meeting at which were present Mr. N. V. Gadgil, Mr. K M Munshi, Mr. Reg, Regional Commissioner of Saurashtra, and Mr. Samaldas Gandhi. Mr. U N Dhebar, Chief Minister of Saurashtra, attended by special invitation. Sardar Patel was to have installed the deity in the temple on Shivratri day, (March 9). It was agreed to have the installation on Chaitra Sudi, new year’s day, falling on April 7 and Mr. Dhebar was requested to be the Chairman of the Reception Committee. It was also decided that a Sanskrit Parishad should be called at Somnath Pattan on that day. 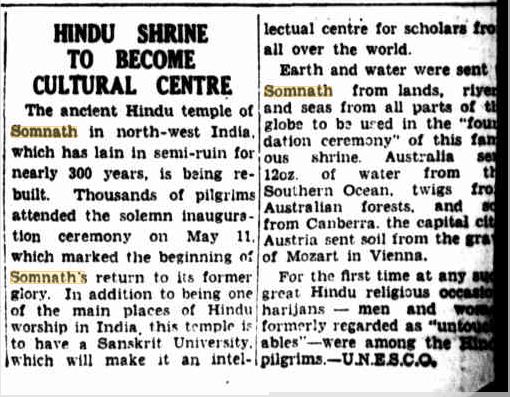 The Somnath Shivalinga installation ceremony had found wide coverage in global newspapers. Reuters report reads: More than 100,000 pilgrims from all over India flocked by train, plane or bullock cart to the bleak sandy beach at Somnath on the Saurashtra peninsula of North-West India, last Friday to witness the resurgence of one of the greatest temples in the history of Hinduism.There, within 100 feet of the waves of the Arabian Sea, the ancient temple of Somnath is rising from ruins for the seventh time on the spot where once the Moon God built his shrine, and near where Lord Krishna, one of the ten incarnations of the Hindu god, was killed by the hunter’s arrow. Astrologers marked out 9.47 a.m. on May 11, 1951, as the most auspicious time in the calendar for the ceremony, which, after a lapse of nearly 300 years, made Somnath once again once of the main places of Hindu worship in India. At that precise moment, a “linga” or column of black marble, phallic symbol of the god Shiva, was lowered through the roof into the centre of the inner sanctum round which the new temple is being built. One hundred and sixty-two white-clad Brahmin priests performed the solemn installation ceremony watched by thousands of pilgrims, including the Indian President, Dr. Rajendra Prasad. For the purification of the “linga,” earth and water were brought to Somnath from lands, rivers and seas all over the world.

Another report from an agency called U.N.E.S.C.O, also published widely in foreign dailies specially mentions: For the first time at any such great Hindu religious occasion, Harijans – men and women formerly regarded as “untouchables” – were among the Hindu pilgrims.

The title of Rajendrababu’s speech on this occasion was – ‘Somnath – A symbol of faith’. Presented below is same in full text:

According to our shastras, Somnath is one of the twelve Jyotir lingas. Naturally, therefore, this temple of Lord Somnath had become the symbol of the wealth, the faith and the culture of India. Its feet were washed by the ocean whilst its dome kissed the Heavens. In its vast quadrangle, in-numerable devotees gathered from all the regions and provinces of India to place at the feet of Lord Shankara their boundless devotion and love and their great wealth. In those days, it was the centre of the faith and the wealth of this country. The fame of its unparalleled glory and wealth had spread to distant regions and countries. Unfortunately, during several centuries it had to suffer calamity after calamity. Again and again it was desecrated and demolished. But, while the external symbols of a national faith may be destroyed, nothing can destroy the fountains of that faith. It was for this reason that in spite of having numerous calamities there always remained in the hearts of the Indian people an undying faith and respect for this Temple of Lord Somnath. It ever was their determination to build this temple again every time it was destroyed and they went on doing so time after time.

We hear the hum of a vast crowd of men and women gathered here from all parts of the country at this moment when this historic temple is coming to life again. In my opinion, we are having the good fortune of witnessing this sacred scene simply because of the creative urge and undying faith which dwell in the heart of man just as Brahma, the Creator, dwells on the Lotus of Lord Vishnu. This faith and creative energy are more powerful than all the weapons, all the armies and all the emperors of this world. By rising from its ashes again, this Temple of Somnath is, so to say, proclaiming to the world that no man and no power in the world can destroy that for which people have boundless faith and love in their hearts. We are re-installing the idol today and it is my conviction that it will live as long as it has its place and foundation in the hearts of the people. On this sacred and historic occasion, it is desirable for all of us to realise the great secret of spiritual faith – that to have a glimpse of God of Truth, it is not necessary for all men to follow one and only one path. On the contrary, if man devotes himself with all love and faith to the service of his fellow human beings and if he dedicates himself to the establishment of the kingdom of love and beauty on this earth, he would surely be Abe to realise God whatever may be the manner of his worship. This great truth had been perceived by our ancient seers and they had proclaimed it to mankind. They had consistently declared that though He is one, yet the wise describe Him in many ways and by many names. Similarly, according to the ‘Mahabharat’ all paths lead to God just as all rivers flow to the ocean. Unfortunately, this great truth of life and faith was not properly grasped by people in many ages which led to very destructive and terrible wars between different countries and peoples. It is plain, therefore, that religious intolerance cannot have any other consequence but to produce bitterness and immorality among men. This is the lesson of history and I would like all my countrymen to grasp it firmly. In our country, particularly, it is very necessary that each of of us should realise that the best course is to act with a sense of respect and equality towards every community and creed. In it lies the welfare of our nation and country and of every one of us. This faith and conviction has impelled India to adopt the policy of secularism and to give an assurance that there shall be no discrimination on ground of religion. Everyone would be provided equal opportunities. In conformity to this ideal, I have respect the affection for all the faiths. Even though I am a Sanatanist Hindu by faith and daily practice, yet, I believe that every man can reach God by worshiping Him according to the dictates of his own faith. Not only have I respect for all religions and their places of worship but I also go to them to pay my respect whenever possible. Whenever there is an opportunity, I go to the ‘durgah’ and the ‘masjid’, the church and the ‘gurudwara’ with the same feeling of respect with which I go to the temples of my faith. The present celebrations in my view proclaim this very truth. It is very plain today that the policy of religious intolerance has always been and shall ever continue to be a failure.

I would also like you to realise that the restoration of this broken link of history does not and cannot imply that we are making or should make an effort to re-establish in our country the psychological, cultural, social and religious conditions which existed here in the centuries that are past. It is no doubt possible for man to turn back but it is not given to man to return to the moment that has passed away. In the world of time, man has no option but to continue marching forward. Indeed, he may look behind to get some light and guidance for the future but he can never return. Today, our attempt is not to rectify history. Our only aim here is to proclaim anew our attachment to the faith, convictions and to the values on which our religion has rested since immemorial ages. We also proclaim to the world that the great truth of spiritual life teaches that every individual should have full independence and opportunities for rising to the highest glory of life to which his experience and natural talents entitle him. On this sacred occasion, it is the duty of each one of us to take a pledge that just as we have restore this historic temple – a symbol of our ancient faith – so also would we put new life into the Temple of Prosperity of our people. In the past, our country was the industrial centre of the civilised world. Caravan loads of manufactured goods from this country used to go to distant lands. Gold and silver used to flow into our coffers in exchange for our goods. Our exports were then very large, while imports were very small. Naturally, India of those days had become the home of gold and silver. In my view, the restoration of this Temple of Somnath would not be complete on the day when a fine building would have been constructed on these foundation. It would be complete only when the temple of our prosperity – of which the Temple of Somnath was but an external symbol – has been erected. In other words, the restoration of this temple would be complete only when we raise the level of our culture to such a degree that if a modern Al Biruni sees our country, he would express himself about out culture in the same eloquent terms in which, a thousand years ago, Al Biruni had expressed himself about India of his day.

This work of restoration had been started by Sardar Vallabhbhai Patel. He played a prominent part in weaving the scattered parts of India into a common whole. An idea had occurred to him that this symbol of the ancient faith of India should be restored to commemorate the restoration of Indian unity. By the grace of God, this dream of Sardar has been fulfilled to a certain extent. But, it would have been realised fully only on the day when prosperity is restored to our people.