Historical mentions of Karnavati in text and complementing realities on surface Ahmedabad: I was surprised to see some historian and journo questioning actuality of existence of Karnavati. This article points out some facts that are neglected/omitted by such gentlemen while claiming that Karnavati is fringe of imagination.

The first mention of Karnavati in Prabandh Chintamani(PC) is like this: Later Karna (then ruler of Gurjar desh Karnadev Solanki from capital Patan) himself defeated Ashapalli resident Asha Bhil and as he(Karna) had shagun of Bhairavi devi, he built a temple of Kochhrab devi there and after defeating chief of six lakh Bhils, he(Karna) installed Jayanti devi’s murti in the temple there and built Karneshwar Dev’s temple (in Karnavati) graced with the beauty of Karnasagar pond. He founded Karnavati city and started ruling there.(page 115-116)

The text doesn’t clearly say there was replacement of Ashapalli with Karnavati. Both could be in place side-by-side may be.

(Jinmandalgani and Charitra Sundar Gani have in ‘Kumarpal Prabandh’ and ‘Kumarpal Charitra’ noted that Karna moved to Ashapalli, founded Karnavati and stayed there as he thought that it’s not good for two rulers to stay at same place. This mention of two rulers is in connection with an incident in which Karna’s son, 3-year old Jaysimh(Siddharaj Jaysimh) while playing with his friends sat on Karna’s throne. Astrologers suggested that Jaysimh should be made ruler of Gurjar desh there and then as it was perfect mahurat and he would be very successful if elevated as king now. Karna was in agreement to this suggestion. He installed Jaysimh as king of Gurjar desh (it was Samvat 1150 on Poshi Vad as per Gujarati Vikram Samvat calendar) there and then. Karna stayed as king of Gurjar desh for 29 years 8 months and 21 days between Samvat 1120 and 1150. He was succeeded by son Jaysimh(Siddharaj).)

Even after Karna’s sun set, Prabandh Chintamani continues to mention Karnavati in several other pages. For instance, one Baniya from Shrimal whose name was Udo was traveling in the night during monsoon. He saw farm laborers and asked them where was his own laborers. He was replied, ‘in Karnavati’. Later Udo became richer and he earned fame as Udayam mantri. He built a Jain temple of 24 tirthankars in Karnavati which was named as Udayam Vihar.

Another mention of Karnavati in Prabandh Chintamani: A Digambar Jain monk namely Kusumchandra who had defeated debaters using his 84 types of arguments elsewhere traveled from Karnataka to Karnavati to win(debates in) Gurjar desh. Jain monk Bhattarak Shri Devsuri was in Karnavati to spend chaturmas (four months of monsoon). Devsuri told Kusumchandra, ‘you should go to Patan for debate with me. I will debate with you there in Rajya Sabha(king’s durbar).’ When Digambar monk reached Patan, then ruler and Karna’s son Siddharaj asked Hemacharya who should be selected for debate with Digambar monk. Hemacharya in his reply said, Karnavati based Devacharya should be called for that.

One more mention of Karnavati: Jain monk Shri Devchandrasuri brought a child, son of Chachig, from Dhandhuka to Karnavati where the child stayed in Udayanmantri’s house with Udayan’s sons and caretakers. Child’s father Chachig came to Karnavati to meet his son. This son of Chachig from Dhandhuka later became well known Jain monk Hemchandrasuri (North Gujarat University in Patan is named after same Hemchandracharya).

We went through the available details of Asha Bhil’s Ashapalli earlier in this article. Prabandh Chintamani in its chapter on Siddharaj Jayasimh’s era mentions one Ashabili village also which is located in the middle portion of then Gurjar Desh on the bank of river Sabarmati. It is possible that this is same Ashapalli mentioned earlier. Prabandh Chintamani reads: Once upon a time, Siddharaj founded Sinhpur village(today’s Sihor near Bhavnagar) for Brahmins in hilly area of Valak region. 106 villages were kept under the purview of Sinhpur. Later when Brahmins were fearing due to roars of lions(in Sinhpur belt) they asked Siddharaj to allot a place to live in the middle portion of country(Gurjar desh). In response to this request, Siddharaj allotted them a village Ashabili on the bank of river Sabarmati and made transportation of food from Sinhpur tax free.

If Ashabii was Ashapalli, which is very likely, we can say it was in parallel existence with Karnavati. (it’s worth noting that ‘Asawil'(Ad 997 – 1030) mentioned by Al Beruni could be Ashabili or Ashapalli. Al Beruni described the places on the coast in which Asawil is mentioned as coastal place between Kanbayat(Khambhat) and Bihroj(Bharuch).

It’s not that Karnavati is mentioned only in Prabandh Chintamani. It is mentioned in other Jain books too. While Hindus by nature have not been in general not excited about making historical records, Jainism had practice of creating records especially in the light of the fact that ruler Kumarpal was converted to Jain faith and Hemchandracharya had lot of influence over rulers of Gurjar desh in particular time-frame.

The play Hammiramadmardan written between A.D. 1225-30 during the reign of King Virdhaval has a very beautiful poetic description of Karnavati as situated on the banks of the river Sabharmati on the highway from Anhilvad Patan to Dholka.

In this play, Vir Dhaval praises Karnavati in Sanskrit as:

It means: “The earth like a woman has worn a floral ornament in her ear and that very kusum(lotus flower) beautifying her is Karnavatinagari. Karnavatinagari looks as if Goddess Laxmi seated on the bank is playing mrudang, the sound of which is heard in the roaring waters of the river Sabhramati.” (Hiragar’s book Ahmedabad, the millennium city)

This reference has been made in Gujarat Nu Patnagar Amdavad book. It says  the play is believed to have been made in the time of Vastupal, so it is older than Prabandh Chintamani

13th century book Prabhavak Charitra which is older than Prabandh Chintamani according to ‘Gujarat Nu Patnagar Amdavad’ also mentions Karnavati more than once. One of copies is available online. Refer pages 93 and 275 among others.

It’s worth mentioning that Kochrab Devi’s temple built by Karna is still there in Kochrab village in Ahmedabad(West) at present. People now call it Kaushalya Devi’s temple. As a field reporter, I had visited this temple during  reconstruction of neighboring house and picked up a wide square brick when foundations were being digged. I had taken the brick to archaeological expert (then head of State Archaeology department Dinkar Mehta who would sit in Ahmedabad district panchayat building in Lal Darwaja area then) who confirmed it was Solanki era brick by its shape, size and make. Later I had kept that brick with me for quite some time. Two column report on this was also published in Gujarat Samachar in January 1998 when I was working as reporter. Old murtis of earlier version of Kochrab Devi temple were offered to river Sabarmati as they were too old and perhaps damaged, locals told me.

Karnasagar pond which is mentioned in Prabandh Chintamani could be actually the Kankaria lake, suggested several historians in last century, however none of them was sure. There’s another Karnasagar pond in defunct situation near Chanasma in North Gujarat. Then there’s a temple namely Karnamukteshwar Mahadev in Sarangpur area of city. It is claimed that it has its origin to Karnadev Solanki era  and it was the same temple mentioned in Prabandh Chintamani as Karneshwar. Shivalinga of this temple is in basement.

‘Gujarat no Rajkiya ane Sanskrutik Itihas (Solanki era)’ book mentions discovery of ruins of Karnavati(possibly) when construction of Samskar Kendra(museum) in Paldi area (on the bank of river Sabarmati and close to Kochrab Devi temple) was at foundation digging stage. Some of those ruins are displayed outside Samskar Kendra even today. The video attached with this article contains glimpses of these ruins. 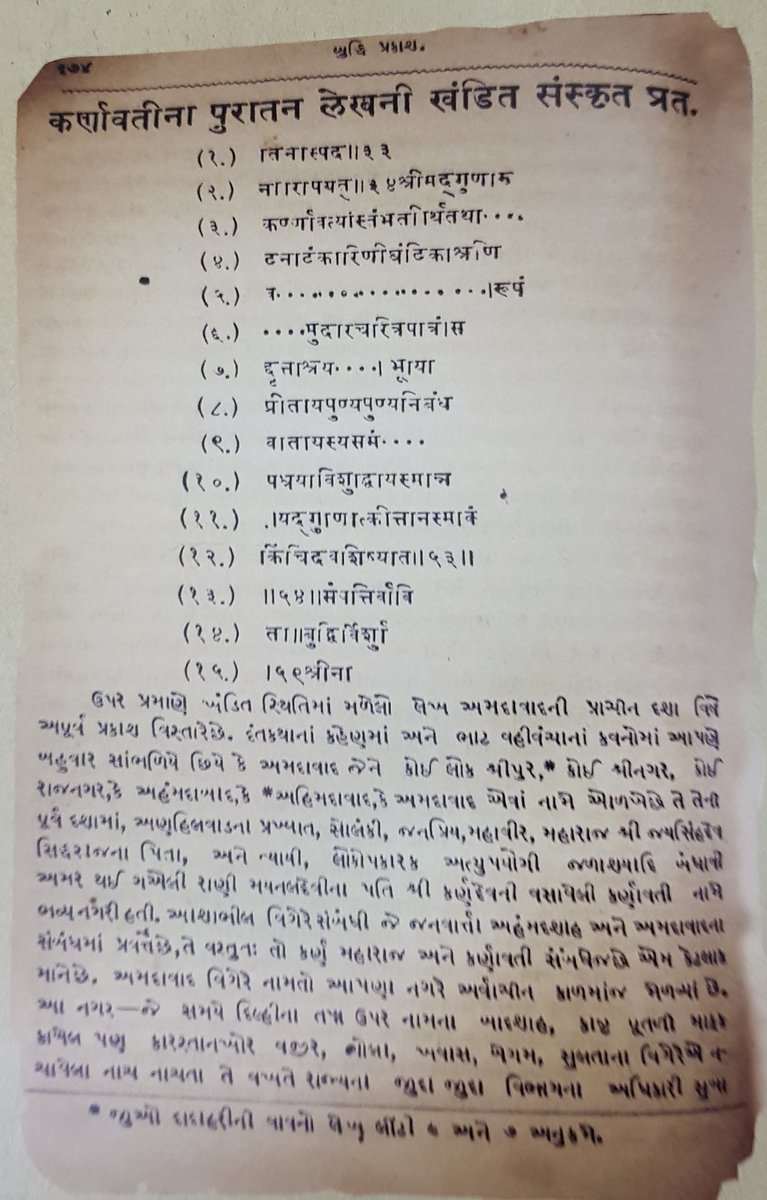 This inscription stone was found from Saptarshi aaraa bank of river Sabarmati(at present across the river opposite Sanskar Kendra). A tall murti of Hanuman was also discovered in southern direction of this inscription. The inscription was found out thanks to research lover elder son of Rao Saheb and due to hard work of city’s Talati from a corer of niche in one of Samadhi temples. As Sadhus were worshiping this inscription stone with chandan, some text was not readable.

The article mentions that recently one more inscription from the time of Siddharaj Jaysimh was discovered from Dahod. The characters Shri, K , Gh, Ch, J, N, Th, Dh, P , Bh and in figures 3 ,4 , 5, 9 were similar in both inscriptions(one mentioning Karnavati from Saptarshi ghat in Ahmedabad and the other discovered from Dahod belonging to the time of Siddharaj Jaysimh).

Inscription that mentioned Karnavati was to be sent to Mumbai based Royal Asiatic Society’s branch museum according to the article. 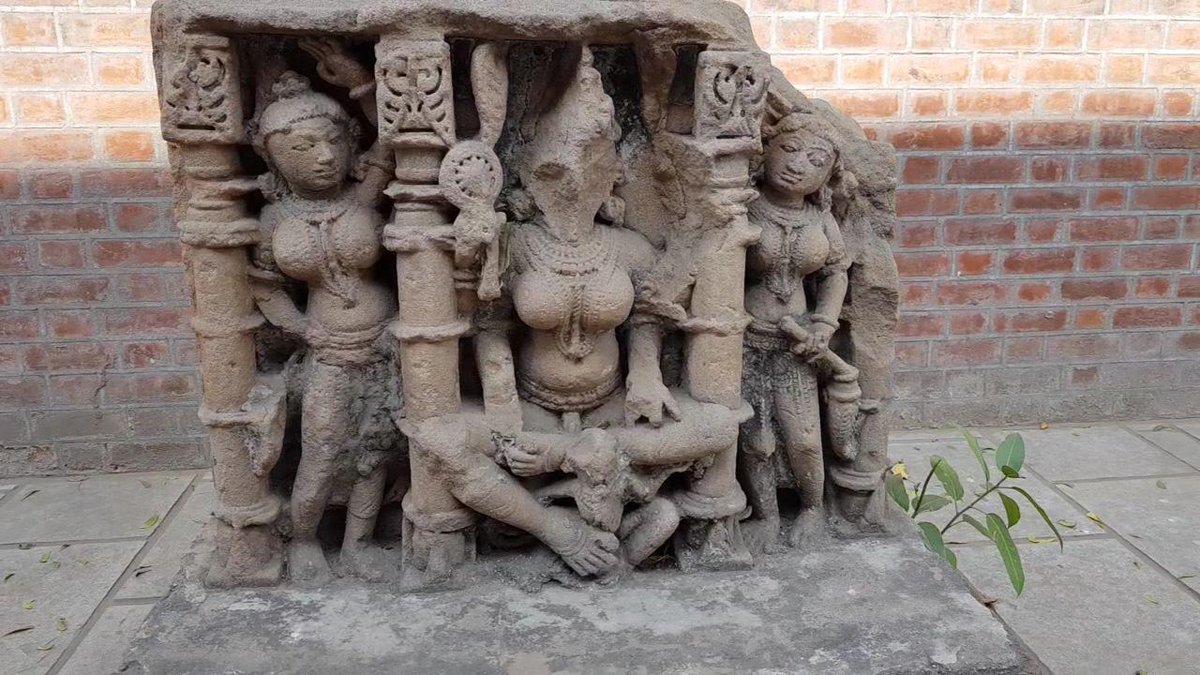 2. Solanki era (from the end of 11th century to beginning of 14th century)

3. Era of Sultans of Delhi and Gujarat (from beginning of 14th century to the end of 16th century)

Jamindar and Mehta said, a Surya idol on North East burj of Gaekwad Haveli, Rishi’s sculpture in Bhadra area, Vishnu’s broken idol could be placed in 8-10th century period looking at their make and type. Bhairavi and Shiv Parvati sculptures, Shreshwar Mahadev’s shivling and sun and other idols there, inscription stone discovered from Saptarshi ghat, Hanuman murti there, belong to Solanki era. 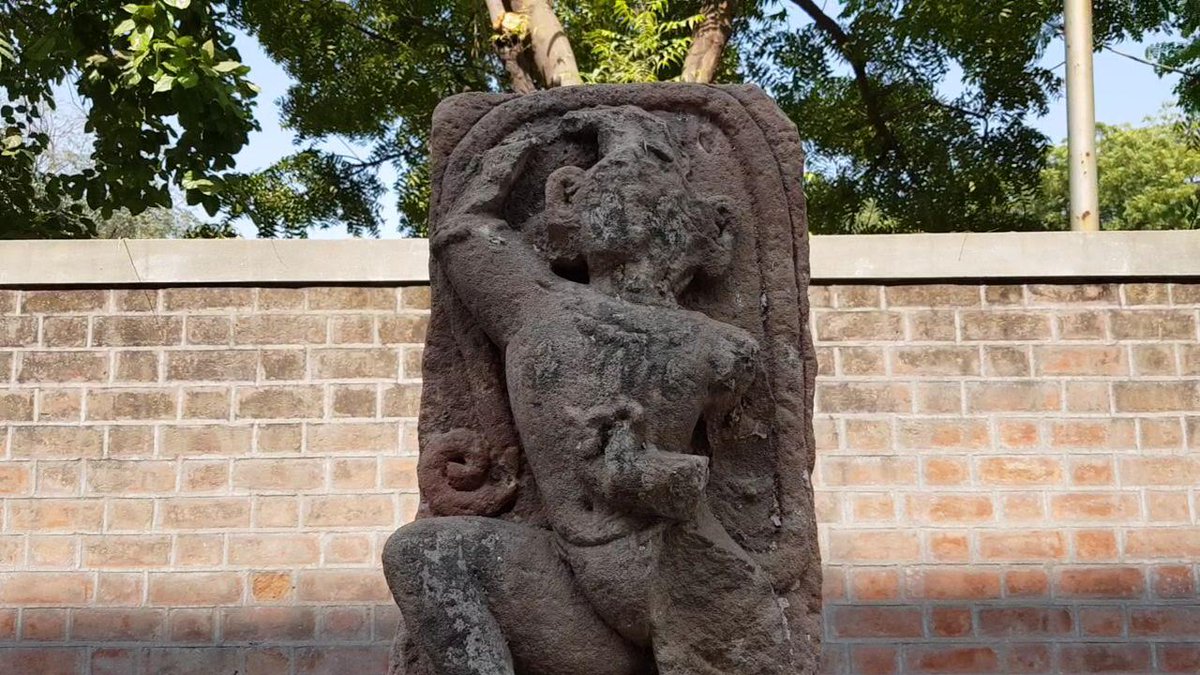 Present location of this important inscription stone is not known. I had traveled to Mumbai and inquire about it in Princess of Wales (now Chhatrapati Shivaji) museum. However this inscription stone was not there.

With case presented above(and there’s more to this if I continue to search for and write), questioning the existence of Karnavati or calling Karnavati as something that is purely imagination, or saying that there’s no historical evidence in support of Karnavati is absurd argument.