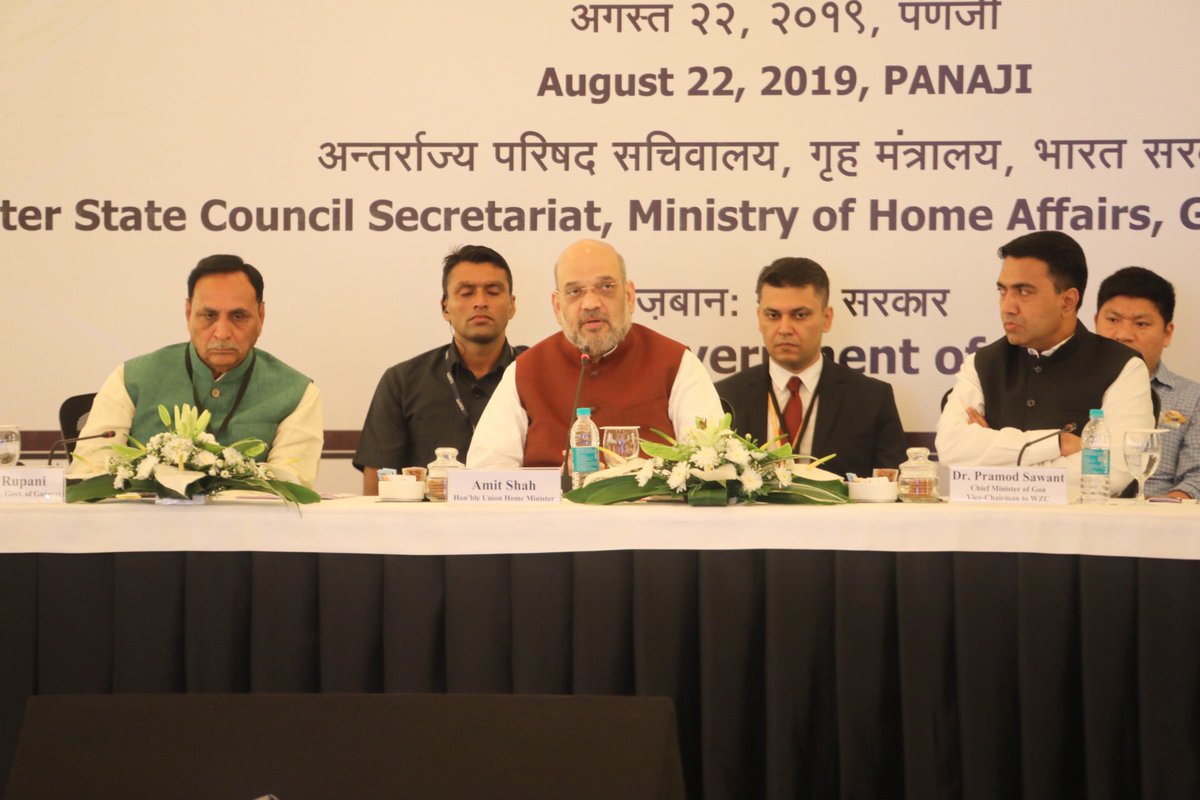 Addressing the meeting, Shri Shah welcomed all the members of the Council to the 24th meeting and hoped that this would be a fruitful meeting where all the issues having Centre-State and inter-State ramifications will be resolved with consensus. He stressed that after due deliberations, unequivocal decisions taken by consensus should be resolved to further strengthen the federal structure of the country.

The Home Minister stated that the West Zone has been instrumental in giving impetus to the Indian economy as the States of the Zone are contributing around 24% to the GDP and 45% to the total exports of the country. Hence, all the pending issues between the States and the Centre need to be resolved on priority through the medium of Western Zonal Council. He further lauded the States in the Zone for excellent work and for being harbingers in the cooperative sector. The States in Zone have been a big exporter of sugar, cotton, groundnut and fish and contributing immensely to the economic development of the country.

The Home Minister expressed his deep concern for the flood victims in the States of Gujarat, Maharashtra and Goa and requested the States to quickly assess the damage caused by the floods and send their requirement to Government of India. He also mentioned that the Government of India has taken an initiative to assess the damage on its own, for which Central teams have already been constituted to visit the flood affected areas without waiting for the reports from the States.

The Council reviewed the progress of implementation of the recommendations made at the last meeting. The Council among others focused on the following issues:

Action on the Master Plan submitted by Maharashtra Government for utilization of surplus Salt Pan Land for rehabilitation of slum dwellers was discussed at length. State Government will send a detailed proposal in two months suggesting broad contours of a transparent financial model for involvement of slum dwellers (and utilization of remaining land as per high FSI in keeping with provisions of a scheme to be formulated as per Slum Rehabilitation Act) on competitive basis for rehabilitation of slum dwellers & transfer of land/monetization for Government of India.
Coverage of all villages which have hitherto remained without any banking facilities within 5 km radial distance by a Bank/India Post Payments Service. This data derived from GIS platform of NIC will be further corroborated by the States using road distance on the ground. Direct Benefit Transfer (DBT) should also be done through IPPBs also everywhere as these are covered by Core Banking Solution. Shri Shah underlined the need for systemic reforms instead of merely chasing the statistics.

Innovative solution of encrypted QR Code on Aadhaar card for verifying antecedents of marine fishermen. States to get the print-outs taken or cards made within a month at Government initiative, so that everyone has Aadhaar card with latest QR Code and foreign national don’t enter Indian territory unauthorizedly through fishing boats.
Detailed monitoring mechanism to ensure that investigation and trial of sexual offences/rape against girls below 12 years of age are completed within two months (POCSO Act and Criminal Law (Amendment) Act, 2018] each. Chief Secretary must personally monitor periodically adherence to legal provisions of completing investigation & trial within two months.

The Home Minister also called upon the States to give their suggestions for improvements in Indian Penal Code and Criminal Procedure Code. He urged the Chief Ministers to ensure regular monitoring at the Chief Secretary’s level of investigation and prosecution of cases in the courts in case of heinous offences such as Narcotics, POCSO Act, murders etc. For this purpose, the States should fill the post of Director Prosecution without any further delay.

Shri Shah further pointed out that the Government has zero tolerance towards offence under Narcotic Drugs and Psychotropic Substances Act. Forensic Science Labs also need to be strengthened to ensure accurate investigation and high conviction. He stressed on the need for setting up Forensic Science Laboratories in the States also. There should also be regular monitoring of all decisions in various areas narrated above through Video Conference by Home Secretary and Special Secretary, Inter-State Council Sectretariat.

CM, Goa welcomed the guests and assured his full cooperation in resolving all pending issues. CM, Gujarat stated that his experience with the Zonal Council had been very nice as almost all the issues pertaining to them had been resolved in the past.

CM, Maharashtra welcomed the decision taken by the Prime Minister of India, Shri Narendra Modi and Union Home Minister regarding removal of Article 370 and 35A of the Constitution in respect of the State of Jammu & Kashmir. He also emphasised that this decision would pave the way for development of J&K and Ladakh and integration of this part with the rest of the country. The Chief Ministers of Goa & Gujarat and Administrator of Daman & Diu and Dadra & Nagar Haveli also endorsed and supported the views of CM, Maharashtra.

The five Zonal Councils – Western, Eastern, Northern, Southern and Central – were set up under the States Reorganization Act, 1956 to foster Inter-State co-operation and co-ordination among the States. The Zonal Councils are mandated to discuss and make recommendations on any matter of common interest in the field of economic and social planning, border disputes, linguistic minorities or inter-State transport etc. They are regional fora of cooperative endeavor for States linked with each other economically, politically and culturally. Being compact high-level bodies, specially meant for looking after the interests of respective Zones, they are capable of focusing attention on specific issues taking into account regional factors, while keeping the national perspective in view.

The deliberations of the Council were warm and cordial, in the true spirit of cooperative federalism and ended with the decision to host the next meeting in Maharashtra.