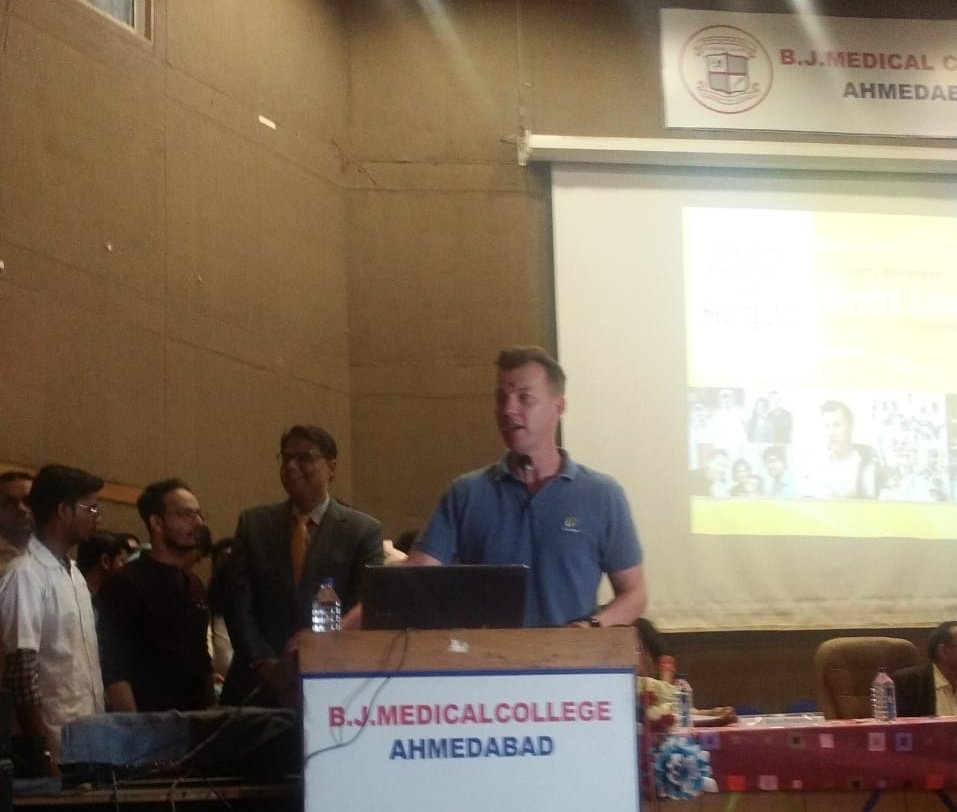 Ahmedabad: Former Australian Cricketer Brett Lee, who was recognized as one of the fastest all-time bowlers in the world, today bowled over the audience during an event here with the very apt use of several Hindi words and phrases.

Lee who was here for a program regarding awareness about hearing loss at the BJ Medical college auditorium here made the packed house burst in to peal of laughter several times with his witty use of Hindi words.

On the occasion the 42 year old former cricketer who has spent a lot of time in India also bowled over the audience with his aptly used Hindi words during conversation.

The audience cheered him when he said ‘Aaram se, Aaram se’ to a student who was asking a question to him about his being fearful of any Indian batsman and also when he said that the last question from the public should come from a ‘Sunder laraki (beautiful girl) from the back rows. When a boy started asking the question he said ‘ O it’s a Larka. He also greeted a boy in Hindi and said that he did not know Gujarati but knew ‘thoda-thoda’ Hindi. He also used words like Khushi hui and India Jeetega during the conversation.

He also made people burst to a prolonged peal of laughter when he called a white man accompanying him as a ‘Gora’ and Firangi.

Bumrah is the best pacer of this time:Brett Lee

Former Australian Cricketer Brett Lee, who was recognized as one of the fastest all-time bowlers in the world, today said that ace Indian pacer Jasprit Bumrah was the best fast bowler of this time.

Lee who was here for a program regarding awareness about hearing loss and its treatment as the brand ambassador of Cochlea, an Austrailan medical device company that designs, manufactures and supplies the Nucleus cochlear implant for patients with damaged cochlea ( the part of the inner ear involved in hearing) said during an event at the BJ Medical college auditorium here that Bumrah was of-course the best pacer of this time in the world.

He said, ‘ Bumrah had done particularly well and is the best pacer of this time.”

Notably, Bumrah, who was from Ahmedabad in Gujarat, was number one bowler in the ICC ranking.

To another query he said that it was difficult balling to all the India batsmen of his time including Sachin Tendulkar, VVS Laxman, Rahul Dravid and M S Dhoni.

‘In fact all the Indian batsmen gave me nightmares,’ he said in a lighter vein.

On being asked about the lowest moment of his life and how he came over it, the former pacer said that there were many lowly moments in his life and career but the worst one was when his son lost his hearing temporarily after a fall. But he regained if naturally which relieved him of it.

Lee also emphasized on the need of the early intervention for hearing related issues, universal newborn hearing screening and spread of awareness about impact of hearing loss.