Water level of the Sardar Sarovar Narmada dam receding again after touching the historic FRL mark of 138.68 meter for the first time 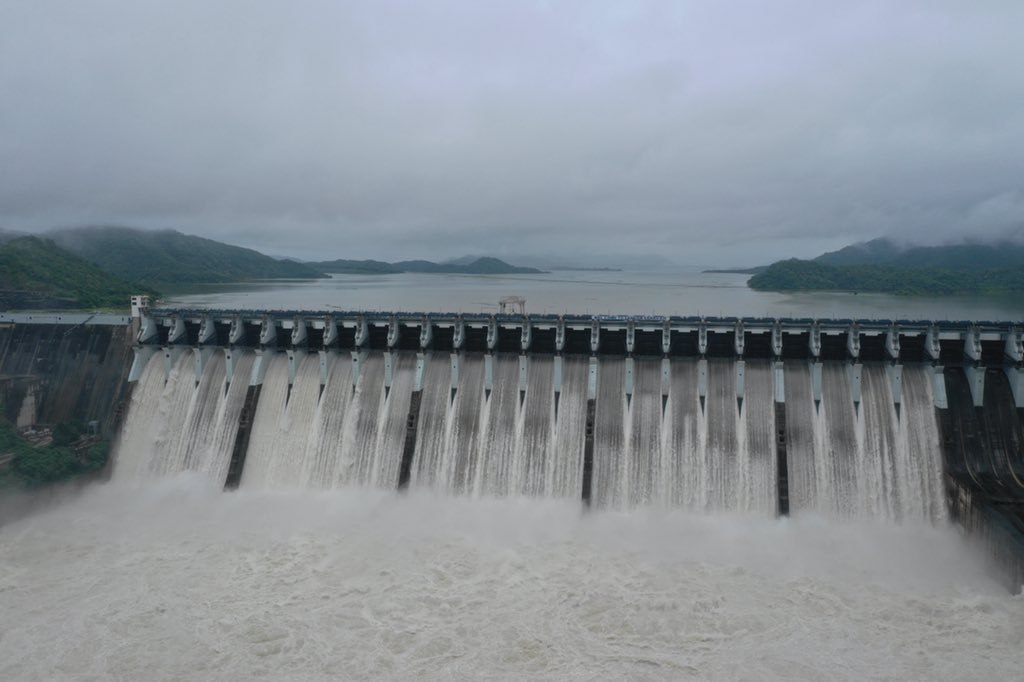 Vadodara: The Sardar Sarovar dam on river Narmada in Kevadia of central Gujarat, the lifeline of water supply in this western state, reached the full reservoir level ie., the highest point of 138.68 meters for the first time at 1920 hrs this evening.

According to the Narmada Flood Control room here, the water level is being brought down after it achieved FRL.

23 of the 30 gates of the dam were 2.7 meter open in an attempt to keep the water level stable.

PM Narendra Modi is to visit the dam on September 17, ie., his birthday to participate in the Namami Devi Narmade Mahotsav of the state government to mark the filling of the dam to its full level after increase in the height two years ago.

Excess water was being flown to the sea towards Bharuch on the downstream side. Due to heavy inflow the low-lying areas close to the river in the down stream have been alerted. People have also been shifted to safer places.

CM Vijay Rupani had said that the whole Gujarat was happy about the filling of the Narmada to its brim. PM Modi on his birthday would remain present at the dam and offer prayer to Narmada water.

The gross storage capacity of water in the reservoir that supplies drinking water to over 3 crore or more than half of the population living in 167 towns and more than 10 thousand villages of this state,was 9460 Million Cubic Meter (MCM) while the live storage capacity was 5760 MCM.

Notably, the gates were opened for the first time in the morning of August 9 this year to release water even as the water level in its reservoir touched a record all time high of that time at 131.45 m due to heavy inflow caused by heavy to very heavy rain in the catchment areas of river Narmada.

Due to the discharge of water in river from the reservoir, all the six units of the river bed hydel power production system which have been started after two years are operational today as well. It houses six 200 MW Francis pump-turbines to generate electricity and include a pumped-storage capability. Additionally, a power plant on the intake for the main canal ie canal bed contains five 50 MW Kaplan turbine-generators. All of these were currently operational .The total installed capacity of the power facilities is 1,450 MW.

During earlier two years the highest level of the dam achieved was 130.75 reached on September 25, 2017.