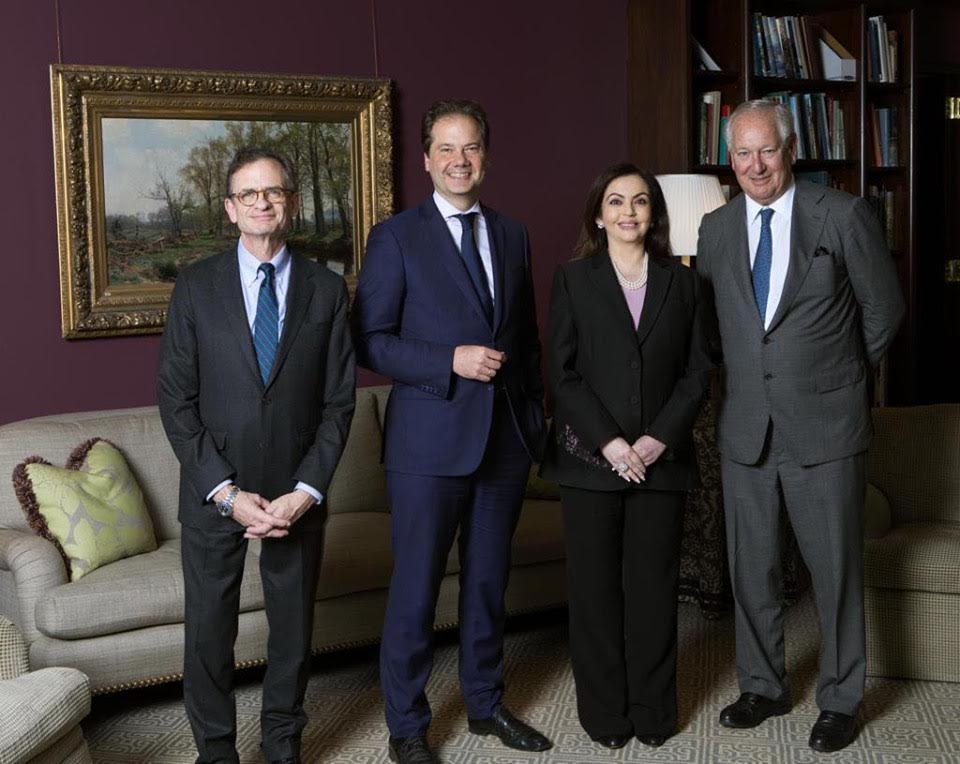 New York, November 12, 2019: Educationist, philanthropist, and businesswoman Nita Ambani has been named an Honorary Trustee of The Metropolitan Museum of Art. It was announced today by Daniel Brodsky, the Museum’s Chairman. Mrs. Ambani’s election took place at the November 12 meeting of the Board. She is the first Indian to be so honored.

Mr. Brodsky commented: “Mrs. Ambani’s commitment to The Met and to preserving and promoting India’s art and culture is truly exceptional. Her support has an enormous impact on the Museum’s ability to study and display art from every corner of the world. It is a pleasure to welcome Nita Ambani to the Board.”

Nita Ambani said, “It has been deeply rewarding for me over the past several years to support The Metropolitan Museum of Art in its desire to expand and enhance its program of exhibiting the arts of India. I have been moved and impressed by The Met’s keen interest, which enables our commitment to seeing Indian art and culture represented on the global platform. This great distinction inspires me to redouble my efforts on behalf of India’s heritage, from the ancient to the contemporary.” Nita Ambani is the Founder and Chairperson of the Reliance Foundation, an Indian philanthropic organization that has supported The Met since 2016, beginning with the exhibition Nasreen Mohamedi. That presentation was the first museum retrospective of the artist’s work in the United States and was also one of The Met Breuer’s inaugural exhibitions. In 2017, the Reliance Foundation committed to support exhibitions that explore and celebrate the arts of India. The first exhibition to benefit from this gift was Modernism on the Ganges: Raghubir Singh Photographs (October 11, 2017–January 2, 2018), followed by Phenomenal Nature: Mrinalini Mukherjee (June 4–September 29, 2019), which marked the first comprehensive display of Mukherjee’s work in the United States. Other exhibitions that will benefit from this sponsorship include the upcoming Tree and Serpent: Early Buddhist Art in India, 200 B.C.–A.D. 400, opening November 10, 2020, at The Met Fifth Avenue, along with exhibitions that will cover such topics as 17th-century Mughal art and contemporary Indian sculpture.

In 2017, the Museum honored Mrs. Ambani at The Met Winter Party, an event celebrating the achievements of those who foster greater diversity and inclusion in the world of art. Generous with her time and expertise, Mrs. Ambani is also a member of The Met’s International Council.

Mrs. Ambani is especially committed to preserving and promoting India’s art, culture, and heritage. Reliance Foundation has sponsored key cultural events such as The Elephanta Festival, and Abbaji, the annual concert of master musician Ustad Zakir Hussain, among the many efforts to recognize the cultural legends of India and ensure their relevance to a younger generation. In its initiatives to advance knowledge of Indian arts internationally, the Foundation has supported not only the series of exhibitions at The Met but also presentations such as Gates of the Lord: The Tradition of Krishna Paintings at the Art Institute of Chicago.

THE MET-NITA AMBANI NAMASTE from Valerie Barnes Film on Vimeo.

In her role as Founder and Chairperson of Reliance Foundation, Mrs. Ambani has impacted the lives of more than 34 million people across India through the organization’s initiatives in rural transformation; health; education; sports for development; disaster response; arts, culture and heritage; and urban renewal. The Foundation’s education program pays special attention to gender equity to increase much-needed opportunities for girls and young women. The Foundation’s Dhirubhai Ambani Scholarship has so far provided financial support to 12,000 students to pursue graduation in any institution of their choice—nearly half of these scholarships are given to girls.

In 2017, Mrs. Ambani received the prestigious Rashtriya Khel Protsahan Award from the President of India for the work of Reliance Foundation in the area of sports for development. In 2016, Forbes listed Mrs. Ambani as one of the 50 most powerful businesswomen in Asia. She is a member of the International Olympic Committee and is the first Indian woman to serve in that role.