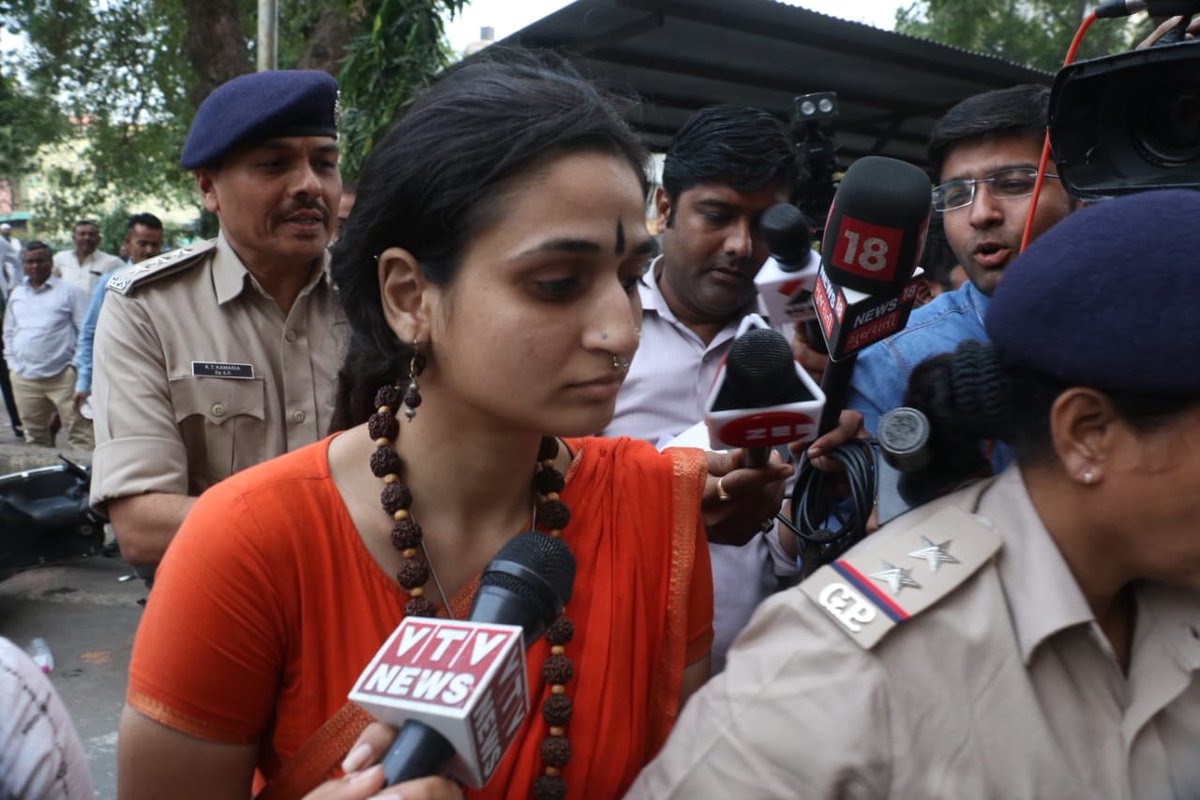 Ahmedabad: A local court here today allowed five days remand of the two ladies associated with the Ashram of controversial god-man Swami Nityanand including its local care-taker and young Sadhvi Pranpriya to the police for further investigation in the sensational case pertaining to alleged kidnapping and misbehaviour with two minor children of a former disciple.

The duo was arrested by police this morning. Police produced them in a local court this evening and sought 10 days demand but the court allowed five days remand. Swami Nityanand has also been made accused in the case.

Amid hullabaloo over the alleged ‘disappearance’ of two young daughters of a former disciple of the controversial god-man Swami Nityanand and misbehaviour with minor children in his Ashram and the school operated by it here, the police investigation was now focused only on the complaint regarding misbehaviour with the two minor children of the disciple.

Rural Ahmedabad SP R V Asari said that of the two young and major daughters of the Tamilnadu based disciple of Nityanad, Janardan Sarma, the eldest Lopa Mudra (21) had gone abroad from Bengaluru Ashram while the other Nityanadita (19) has also expressed here unwillingness to join her parents.

‘We can’t force the two adult daughters. Now the police’s investigation is based on the complaint filed by their father regarding the misbehaviour with his minor third daughter and a son in the Ashram school here. We would also contact Nityanad in the course of investigation. Ashram care taker Pranpriya and her aide Priyatatwa have been arrested today and taken on remand for further investigation. So far as our current information the controversial god-man was earlier also named in criminal cases in South India and his whereabouts are not known,’ the SP said.

Asari said that Nityanadita has said that she was out of station and would come to meet the police at a convenient time. ‘We can’t force her,’ he repeated.

Meanwhile the Gujarat High Court today issued notices to the Ashram and police on the habeaus corpus petition filed by Sarma for physical production of his two young daughters. The next date of hearing has been fixed for April 26.

Lopa Mudra, the eldest daughter who had alleged that his father has done embezzlement of Ashram money, had issued a video claiming that she was an adult and was free to take her decisions. She has claimed to be in the Caribbean country of Trinidad and Tobago now.

Sarma’s advocate Priyesh Shah said that the two should be produced before the court as there was apprehension that they have been kept under captivity by the Ashram people and the videos issued by them might have been issued under pressure.

Controversial god-man Nityanada had broken his silence and issued a video on the social media yesterday in which he attacked the media in veiled way and somewhat shrewdly praised the disciples of Gujarat. Police today said that he would also be contacted and if the need be arrested.

Notably, amid the ongoing ‘high-voltage’ drama police today again visited the spot ie Swami Nityanad’s Sarvjnapeetham Ashram, which operates a residential school, here and also visited a nearby residential area where some of those associated with the Ashram including Nityanadita used to live. The Ashram care taker and her associate Priya Tatwa were arrested from there. The lady care taker of the Ashram Sanyasini Pranpriya had yesterday said that it was a case of family dispute due to which the Ashram and school were being defamed.

Police said that on November 1 this month, Sarma, had approached the police claiming that the school and the ashram administration has forcefully kept all four of his children including the three daughters. ‘During initial Inquiry we found that two of the girls of Sarma who were adult and associated with the Ashram since long, are not willing to part ways with it and go with their parents. One of the them, the eldest one Lopamundra is living abroad for the past 3 years. The second one Nityanadita (19), has also willingly chosen to remain with the Ashram. She had earlier given her written statement to the police in this regard. Two of the other children of Sarma including 14 year old third daughter and 12 year old son have been handed over to the parents after they showed willingness to return home with them,’ Sarda said.

The whole episode had taken a nasty turn with the two young daughters addressing the media over video calls and dressed in saffron robes yet wearing designer ear-rings, made very serious allegations against their own parents. The eldest one had alleged that her father had done embezzlement of a huge some of Ashram money. They youngest one about whose whereabouts no one including the police is sure, claimed that her mother Bhuwaneshwari was in to an illicit relationship with another man.

Meanwhile amid growing criticism for handing over its land to the Ashram, the DPS school which is facing a probe in this regard today claimed that it has cancelled the lease. Principal Hitesh Puri today said that the lease done for five years in June this year has been cancelled. ‘We had given the lease to the Ashram for educational purposes but in the wake of the recent developments we have decided to cancel it,’ he told newsmen today. Ahmedabad district collector however said that a probe regarding the lease and other related issues has been ordered.

Meanwhile, a senior Congress leader Shaktisinh Gohil has alleged that an IAS officer in the education department was trying to save the Ashram people as well as the DPS for vested interests. He has tweeted in this regard. Gohil however has praised the police for its action in this case.