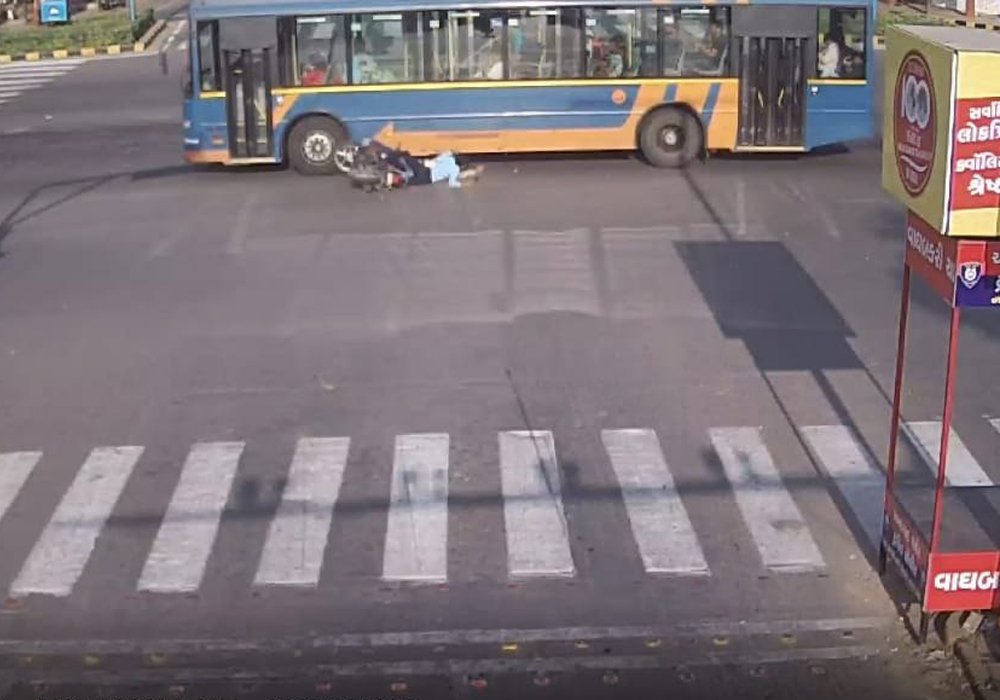 Ahmedabad: Two youths died today morning at Panjrapol char rasta in Ahmedabad – West as their bike collided with a moving bus which is part of AMC run Janmarg Bus Rapid Transit System (BRTS). The locals gathered at the cross roads and pelted stones over BRTS bus. Regular traffic was disrupted for nearly half an hour following this incident. City Mayor has ordered probe in this case. Victim Jayeshbhai is personal assistant of of Women and Child Development Commissioner. Jayeshbhai was also husband of Police Sub Inspector D.B. Lakhontra. Jayeshbhai’s brother Nayanbhai, also a victim was working in ICICI Bank in Talala in Saurashtra. Father of victim brothers, Shri Hirabhai is General Secretary of Gir-Somnath district unit of opposition Congress party. City Congress unit staged protest at AMC office after this incident and demanded action against bus contractor.

Police said that the deceased were identified as one Nayan H Ram (28) and his younger brother Jayesh H Ram (25).The two were run over by a BRTS bus while they were trying to cross the road on their motorcycle. The CCTV footage of the incident that had taken place at around 9 am this morning has come to fore. Nayan H Ram was himself PA to women and child development commissioner while his wife is a Police Sub Inspector. His brother who also died in the accident was in to a private job. Mayor Bijalben Patel has ordered a probe in to the incident. Meanwhile the driver of the bus involved in the incident has been suspended till inquiry was completed.

In a similar incident in Surat city where three people had died in a road mishap involving a city bus, an 18 year old boy was crushed to death in the BRTS dedicated route in Udhana area. The deceased has been identified as Mojammil Amjad Shaikh resident of Bhestan area in the city.