New Delhi:In a first mobile tariff hike in past four years, telecom operator Vodafone Idea on Sunday announced new plans under which call and data charges will be dearer for its pre-paid customers by up to 50 per cent from December 3.

Besides this, Vodafone Idea will also charge 6 paise per minute for every outgoing call made by customers on to the network of other operators.

The company will increase its entry level unlimited plan with a year-long validity by about 50 per cent to Rs 1,499 from with 24 GB of data instead of Rs 999 plan, which comes with 12 GB data usage limit.

Vodafone Idea has only revised rates of plan promising unlimited mobile and data services and also introduced some new plans.

A company official explained all the existing plans in unlimited category will be replaced by the new plans from December 3 and new plans will be introduced or revised based on market response.

Though the company classifies a set of plans in ‘unlimited’ category, these actually come with usage limit for data at a promised speed and 100 SMS per day limit.

The highest rate of increase of 41.2 per cent has been announced by the company in annual unlimited category plan which will cost Rs 2,399 instead of 1,699 at present.

The starting plan with data offering of 1.5 Gb per day with 84 days validity in “unlimited” category will cost around 31 per cent more at Rs 599 compared to Rs 458 at present.

Vodafone Idea which is reeling under massive debt of around Rs 1.17 lakh crore had earlier cited acute financial stress on the company behind the decision to raise mobile call and data charges.

Vodafone Idea last month reported a consolidated loss of Rs 50,921 crore — the highest ever loss posted by any Indian corporate — for the September quarter on account of liability arising out of the Supreme Court’s order in the adjusted gross revenue (AGR) case.

The company has estimated liability of Rs 44,150 crore post the apex court order, and made provisioning of Rs 25,680 crore in the second quarter this fiscal.

Bharti Airtel to raise mobile call, data charges by up to 42% from Dec 3

Telecom operator Bharti Airtel on Sunday said it will raise call and data plan charges for pre-paid customers from December 3, becoming the second operator after Vodafone Idea to announce an increase in its tariffs.

“Bharti Airtel today announced its revised tariff plans for its mobile customers. These tariffs will be applicable from Tuesday, December 3, 2019,” the company said in a statement.

The company too announced new plans which will cost up to 42 per cent more compared to the price that Airtel pre-paid customers pay at present for plans in the “unlimited” category.

“Airtel’s new plans, represent tariff increases in the range of a mere 50 paise per day to Rs 2.85 per day and offer generous data and calling benefits,” the statement said.

In addition, Airtel said that it will provide exclusive benefits as part of the Airtel Thanks platform, which enables access to premium content from Airtel Xstream — comprising 10,000 movies, exclusive shows, and 400 TV channels, Wynk Music, device protection, anti-virus protection and much more. 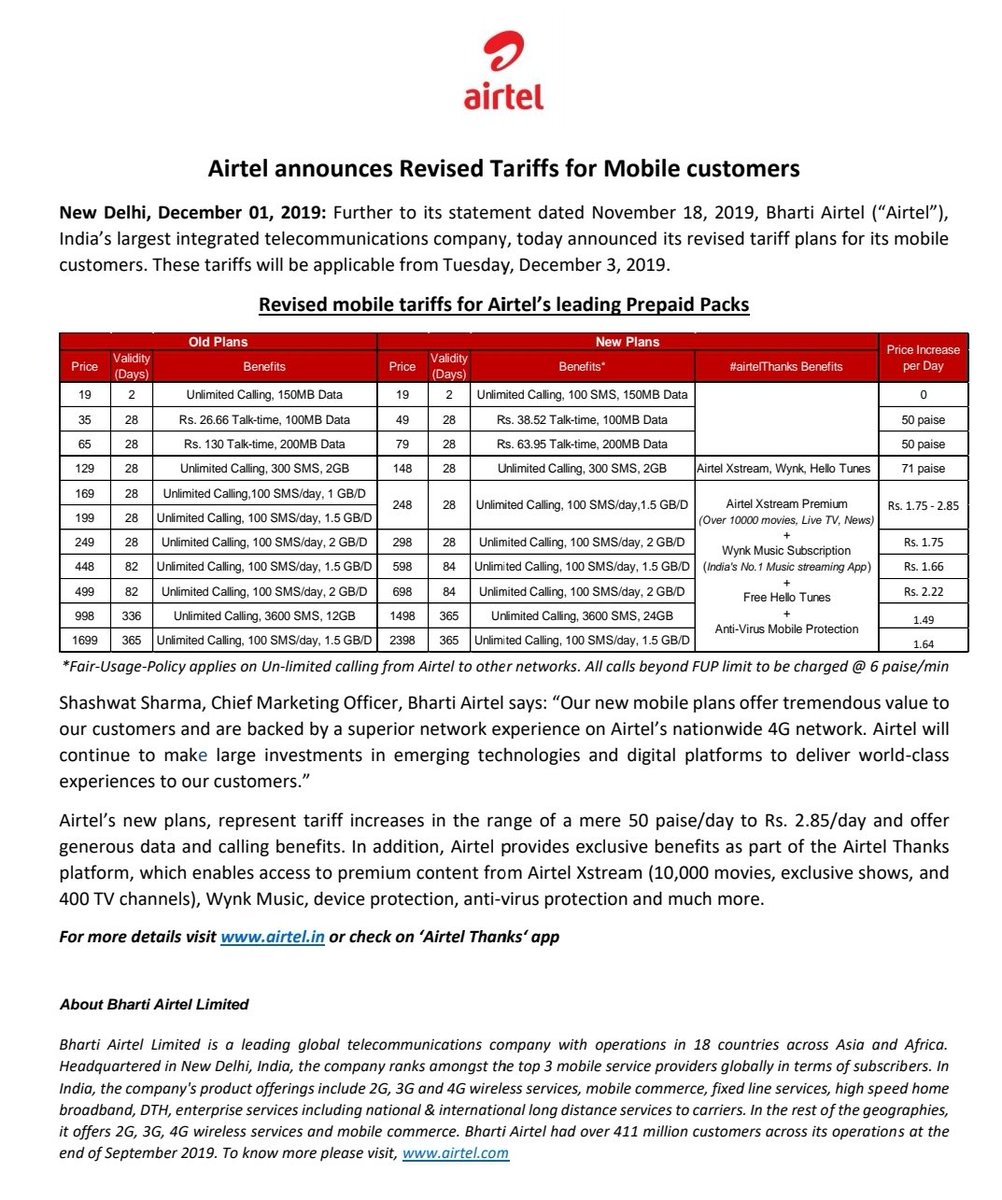 Jio to introduce new tariff with effect from December 6

Reliance Jio in a statement issued today said it will be introducing NEW ALL-IN-ONE plans with unlimited voice and data. These plans will have a fair usage policy for calls to other mobile networks. The new plans will be effective from 6th December 2019 (06/12/2019).

‘Although, the NEW ALL-IN-ONE plans will be priced upto 40% higher, staying true to its promise of being CUSTOMER-FIRST, Jio customers will get up to 300% more benefits.’

‘While remaining committed to the ultimate interest of the consumer, Jio will take all necessary steps to help sustain the Indian telecommunications industry.’

‘Jio will continue to work with the Government on the consultation process for revision of telecom tariffs and looks forward to participation from all other stakeholders.’ 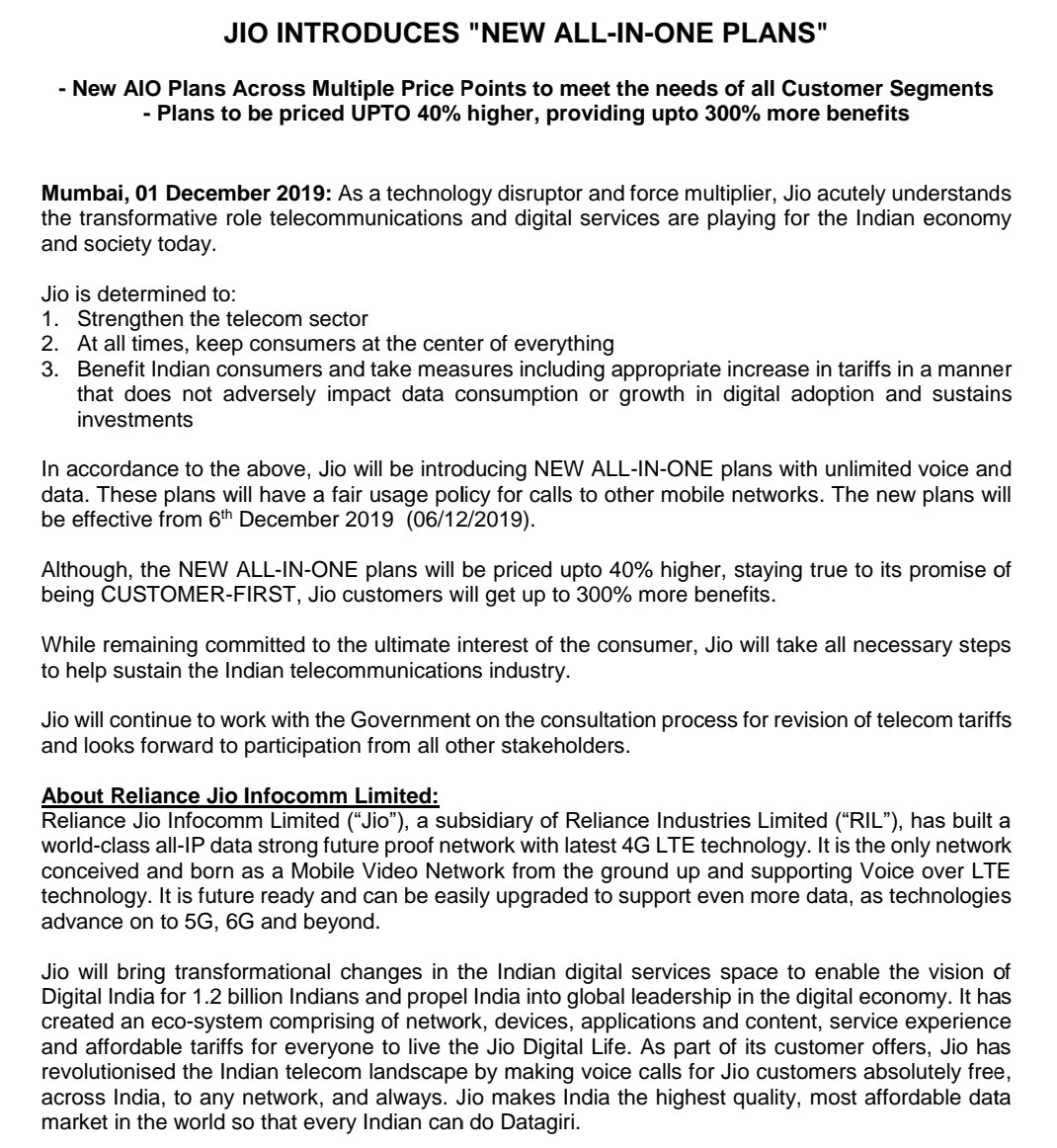