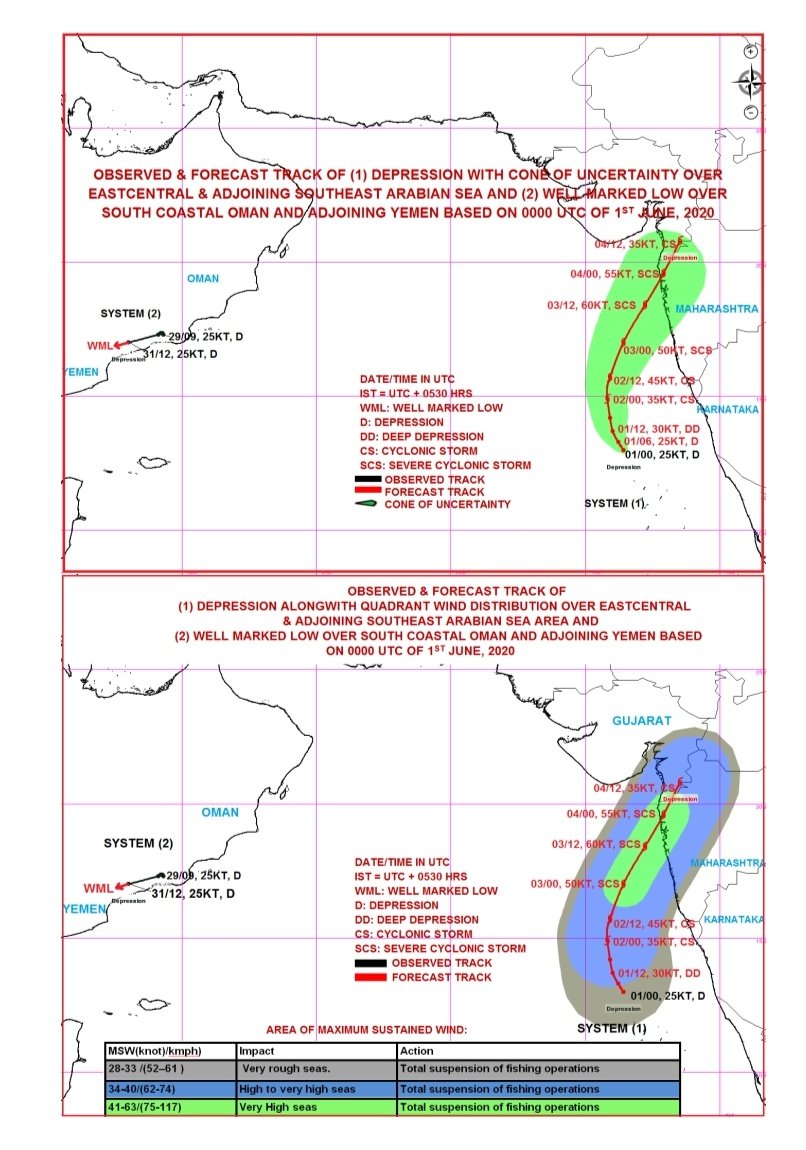 Gandhinagar: The Government of Gujarat today said it has put coastal districts including Bhavnagar and Amreli on high alert and moved 10 NDRF teams and 5 SDRF teams. State Chief Minister for the first time after lockdown situation stepped out of Chief Minister’s bungalow and reached State Emergency Centre to chair a meeting of officials over upcoming cyclone situation.

According to CM, 90-100 km/hour wind is likely in Daman, Surat, Navsari, Valsad, Dang, Bharuch, Bhavnagar and Amreli along with heavy rains on 3rd June. While 10 teams of NDRF and 5 teams of SDRF have been moved to related districts, more teams have been kept reserved. Those suffering from illness, old persons, children would need care during this time. District collectors have been instructed to complete the task of shifting of those in low lying areas to safer places by 12 noon tomorrow. While Surat, Navsari, Valsad, Dang and Bharuch district have been put on high alert, the districts of Bhavnagar and Amreli have been put on alert. State control room and district control rooms have been activated on round the clock basis for exchange of information. Food storage lying in open will be shifted to safer place. Shelter facilities are to be created in schools and colleges. Shifting of people in vulnerable areas will take place with provision of masks and PPE kits

The depression over Eastcentral and adjoining Southeast Arabian Sea moved nearly northward with a speed of 07 kmph during past 3 hours and lay centred at 0830 hours IST of today the 1st June, 2020 near latitude 13.2°N and longitude 71.4°E about 360 km southwest of Panjim (Goa), 670 km south-southwest of Mumbai (Maharashtra) and 900 kmsouth-southwest of Surat (Gujarat).

It is very likely to intensify into a Deep Depression over Eastcentral and adjoining Southeast Arabian Sea during next 12 hours and intensify further into a Cyclonic Storm over Eastcentral Arabian Sea during the subsequent 24 hours. It is very likely to move nearly northwards initially till 02nd June Morning and then recurve north-northeastwards and cross north Maharashtra and south Gujarat coasts between Harihareshwar (Raigad, Maharashtra) and Daman during evening/ night of 3rd June.

The Sea condition is very likely to be very rough to High over northeast Arabian Sea along & off Gujarat coast from 3rd June.