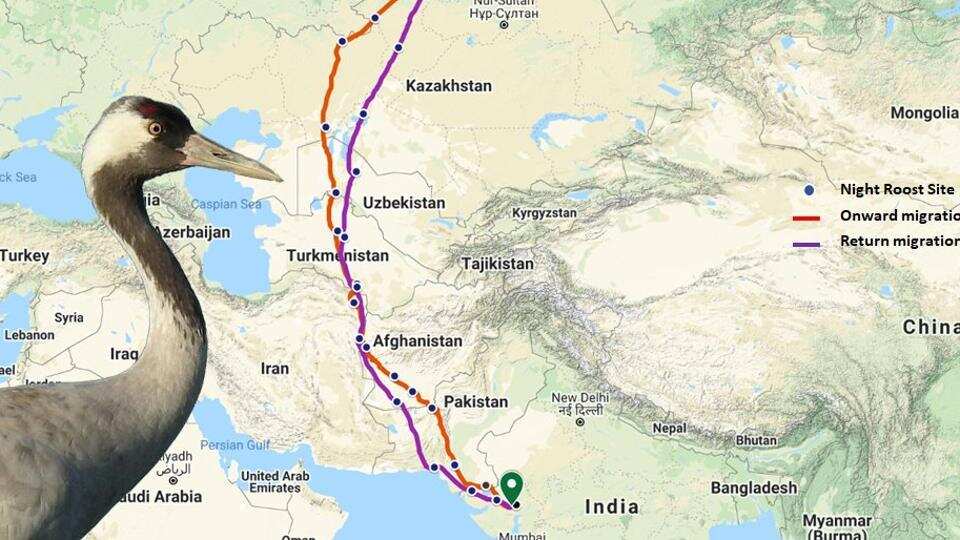 Gandhinagar: The Wildlife Institute of India (WII), Dehradun has tracked the journey of a female common crane bird from Gujarat to its breeding site in Northern Kazakhstan and back to Gujarat where it returned. This migratory bird named Vadla was tagged with a transmitter in March this year by WII scientists. The project is funded by the Power Grid Corporation of India Limited.

Prakash Javadekar, Union minister for environment, forest and climate change (MoEFCC) took to social media on Tuesday morning and tweeted, “A common crane named Vadla, migrated to a breeding site in Kazakhstan and then returned exactly to the site of her tagging in Gujarat on World Migratory Bird Day Oct 10. Isn’t it amazing and Kudos to Dr. Suresh Kumar and his team who tracked Vadla.”

Suresh Kumar, a senior scientist from the Endangered Species Management department in WII who led the project said, “One of the ways in which we are trying to understand this is by deploying transmitters on these birds to see how they move around when they are here. Now, one such bird that we had tagged in March this year, left for its breeding ground from Gujarat and has now returned. While tagging we did not know about its breeding ground, as it was being done for the first time… it ended up in Northern Kazakhstan from where it has returned,” Kumar said.

The scientist further said that they now know the migratory route of the bird, the spots where the crane stopped at night for resting.