Australia to participate in Exercise Malabar 2020 with other QUAD countries India, Japan and America 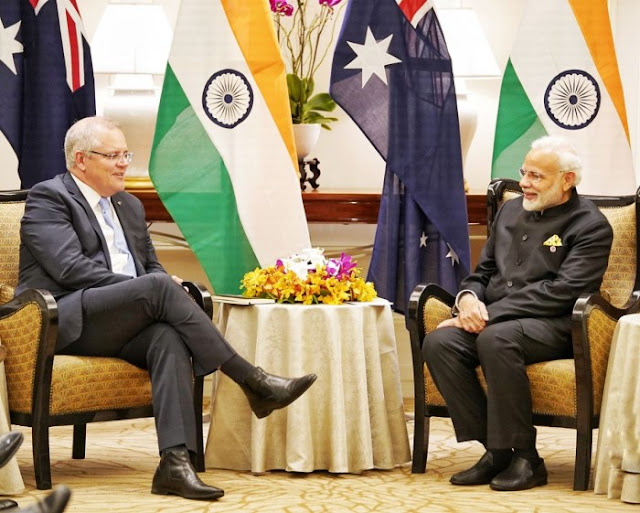 Sydney: Following an invitation from India, Australia will participate in Exercise MALABAR 2020. With this announcement by Australia, Malabar naval exercises, is going to see the participation of all four Quad countries — India, United States (US), Japan and Australia.

“High-end military exercises like MALABAR are key to enhancing Australia’s maritime capabilities, building interoperability with our close partners, and demonstrating our collective resolve to support an open and prosperous Indo-Pacific,” Minister Reynolds said.

“Exercise MALABAR also showcases the deep trust between four major Indo-Pacific democracies and their shared will to work together on common security interests.”

Minister for Foreign Affairs and Minister for Women, Senator the Hon Marise Payne, said the announcement was another important step in Australia’s deepening relationship with India.

“This builds on the Comprehensive Strategic Partnership, to which Prime Minister Morrison and Prime Minister Modi agreed on 4 June 2020, and which I progressed with my counterpart, Minister of External Affairs Jaishankar, this month when we met in Tokyo.

“It will bolster the ability of India, Australia, Japan and the United States to work together to uphold peace and stability across our region.”

Participation in Exercise MALABAR demonstrates Australia’s enduring commitment to enhancing regional security, stability and prosperity in the Indo-Pacific, and increasing the capability and interoperability of the ADF.

At a virtual summit between Prime Minister Narendra Modi and his counterpart Scott Morrison last month, India and Australia elevated their ties to a comprehensive strategic partnership and signed the crucial Mutual Logistics Support Agreement (MLSA) for reciprocal access to bases, medical and training facilities, spares and fuel.

Malabar Exercises began in 1994 to increase interoperability between the Indian and US navies and enhance cooperative security relations between the two sides.