Gandhinagar: Chief Minister Vijaybhai Rupani today urged to complete the remaining 24 km long canal-works of Kutch branch canals, which are supplying Narmada-waters to Kutch, on priority basis. In Gandhinagar today, the chief minister had held a high-level meeting to make a detail review of the works being done for supplying Narmada-waters to Kutch. The meeting was also attended by Deputy Chief Minister Mr. Nitinbhai Patel and Minister of State Mr. Vasanbhai Ahir. During the meeting...Read More Gandhinagar: The Government of Gujarat today announced release of Narmada water in ten rivers of State. The rivers that are going to be richer with Narmada waters are Heran, Dev, Karad, Kun, Vatrak, Meshwo, Sabarmati, Rupen, Pushpavati and Banas. In order to fill these rivers with water, Narmada main canal flow has been increased from 11,000 to 13,000 cu sec. At present 1086 cu sec water is being released for 8 of 10 rivers listed above, while in another two rivers namely Meshwo and ...Read More Gandhinagar: Gujarat Dy Chief Minister Nitin Patel today said that Narmada water for Kharif season irrigation will be released from Sunday, June 7. Patel said, Sardar Sarovar has huge water storage compared to past five years which 1.51 million acre ft. Water level in the dam is at 123.61 meter mark. This storage is being used for drinking water supply and also for supply to regional water schemes such as Sujalama Sufalam Yojana and SAUNI yojana for the benefit of water tanks, local reservoi...Read More Gandhinagar: The Government of Gujarat today moved Gujarat Irrigation and Water Discharge Management (Amendment) bill 2019 which was passed by majority. The bill proposes upto Rs. 20,000 fine or six month imprisonment for those creating obstruction in canal by putting engine or other tools. The bill has also provision of upto one year imprisonment or Rs. 50,000 fine or both for one who creates obstruction in canal flow regulation and direction. One who divert the flow of river or create obst...Read More

After filling up enough stock of water capable of meeting 70 days need, supply of Narmada water to Aaji and Nyari dam stopped

Rajkot: The filling up of Narmada water in Aaji and Nyari dams here was stopped today with enough water stored in the dams to continue the supply of water to this biggest city of Saurashtra for over two months. An official today said that the city needed around 5 million cubic ft of water per day for its needs and now the two dams have enough water for supply up to 70 days or ie up to August 15. Much before that the monsoon would arrive. He said that the water filling was st...Read More

Palanpur: District collector of Banaskantha has in a notification made announcement that water in main Narmada canal passing through the district is reserved for drinking water supply to 477 villages of 7 talukas of district. District collector has asked the citizens of Kankrej, Diodar, Bhabhar, Tharad, Vav, Suigam, Lakhni etc areas not to lift Narmada main canal water. Collector has warned that those involved in such activity will face action and pumping machines and pipes used to lift main c...Read More

Bopal to get water from Rs.160-crore Narmada Canal based project: Gujarat CM 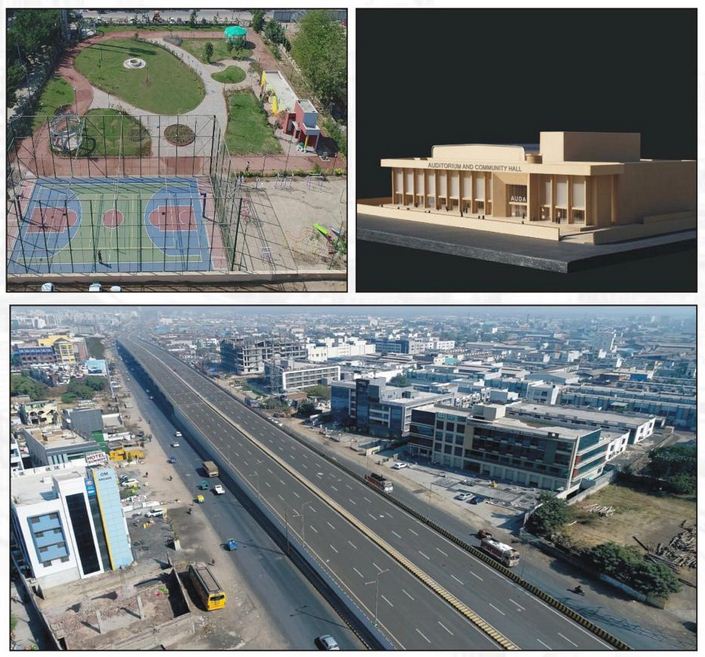 Ahmedabad,: Gujarat Chief Minister Vijay Rupani today dedicated and laid the foundation stones of various development projects of Ahmedabad Urban Development Authority (AUDA) worth Rs.285-crore. Speaking on the occasion, he said that the Bharatiya Janata Party Government has developed a well-planned system to ensure people’s every paisa is spent in development works through transparent and corruption-free time-bound manner. In the past, the Congress governments used to lay stones but left t...Read More Gandhinagar: Gujarat government today said that it would continue to provide irrigation water from Sardar Sarovar Narmada reservoir to farmers for their standing crops in the wake of scanty rain at the fag end of monsoon season. It also said that despite supply for irrigation purposes there was enough water for the drinking needs of the state for a year in the reservoir. Talking to newsmen here Deputy CM Nitin Patel said that the state government had decided to s...Read More

Gandhinagar: In a significant pro-farmer decision, the Gujarat government today took a decision to release water in all the canals on Narmada Project to save the crops in the wake of scanty rain in various parts of the state. Education Minister Bhupendra Chudasama and MoS Irrigation Parbat Patel today informed this decision taken in the cabinet meeting headed by CM Vijay Rupani. They said that around 7000 cuses of water was already being released in Narmada canal for ...Read More