Ahmedabad: The Gujarat High Court today rejected the bail application of sacked IPS officer Sanjiv Bhatt in a custodial death case in which he was convicted with life term by a court in Jamnagar on June 20 this year. The Division bench of justice Bela Trivedi and Justice A C Rao also rejected the bail plea of co-convict former constable Pravinsinh Zala. The Gujarat high court would later hear the plea of Bhatt challenging his conviction by the lower court. He is behind...Read More Palanpur: Two Congress MLAs and party leader and former Patidar quota leader Hardik Patel were today detained along with around 30 supporters here while they were on way to the district jail here to meet dismissed controversial IPS official Sanjeev Bhatt. Police, however allowed the wife and sister of Bhatt, to meet him. Hardik and Congress MLAs from Palanpur and Patan (Mahesh Patel and Kirit Patel) had reportedly joined the tie rakhi to Bhatt campaign led by his wife Sh...Read More 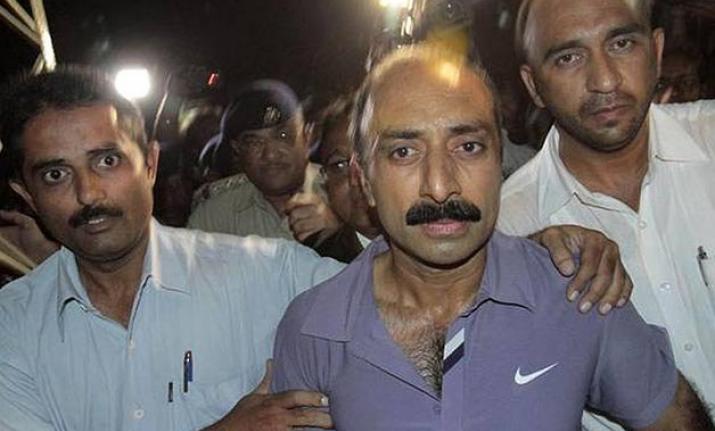 Jamnagar: Jamnagar: A local court here today awarded life sentence to sacked IPS officer Sanjiv Bhatt (55) in connection with an around 3 decade old custodial death case. Bhatt in the capacity of the then ASP of Jamnagar on October 30, 1990 ordered the detention of over 133 people in Jamjodhpur town of Jamnagar district in Gujarat in apprehension of riot during the Rath Yatra of veteran BJP leader L K Advani there. After they were released one of them Prabhudas Vaishnani had died in hos...Read More

Ahmedabad: There was a double trouble for controversial dismissed IPS officer Sanjiv Bhatt on Friday. The Gujarat high court rejected his plea for quashing a criminal complaint filed by complainant Mahesh Chitroda against him accusing him of committing atrocity as superintendent of police in Jamnagar district in 1999. Justice Bela Trivedi dismissed petition after Bhatt's lawyer failed to appear for hearing. The order reads: 'None is present for the applicant though the matter is called out...Read More

Palanpur: Charge sheet was filed against then Banaskantha SP Sanjiv Bhatt and then PI IB Vyas in Palanpur court by CID Crime in year 1996 opium planting case.Sumersinh Rajpurohit, a practicing lawyer at Pali in Rajasthan. He had taken an office on rent in Pali. The property in which his office was located was in dispute. A court case was going on to vacate the property. The property was belonging to former Judge of Gujarat High Court RR jain's sister's in-laws family. Sanjiv Bhatt was asked ...Read More

Ahmedabad: Gujarat High Court today allowed 10 days remand of dismissed IPS officer Sanjiv Bhatt and former LCB PI I B Vyas to CID-crime in connection with a sensational case pertaining to the alleged abduction and arrest of a Rajasthan Lawyer after planted recovery of opium from a hotel in Palanpur headquarter town of Banaskantha district in North Gujarat over 22 years ago. His 14 days remand request was earlier rejected by the ACJM court of Palanpur in Banaskantha district on Septembe...Read More

Ahmedabad: The CID crime of Gujarat police today moved high court for remand of dismissed IPS officer Sanjiv Bhatt who was on September 5 arrested by the SIT of the investigating agency here in connection with a sensational case pertaining to the alleged abduction and arrest of a Rajasthan Lawyer after planted recovery of opium from a hotel in Palanpur headquarter town of Banaskantha district in North Gujarat over 22 years ago. His 14 days remand request was earlier rejected by the ACJM...Read More

Ahmedabad: Dismissed IPS officer Sanjeev Bhatt was today arrested by the SIT of CID-crime here in connection with a sensational case pertaining to the alleged abduction and arrest of a Rajasthan Lawyer after recovery of Opium from a hotel in Palanpur headquarter town of Banaskantha district in North Gujarat over 22 years ago. DGP CID crime Ashish Bhatia said that Bhatt and the then PI and his subordinate have been formally arrested while four to five other accused including then policemen ...Read More Gandhinagar: Dismissed IPS officer Sanjiv Bhatt has been taken to Gandhinagar by CID Crime of Gujarat Police for questioning in Palanpur drug planting case. CID Crime has taken into detention Bhatt with six others including retired Police Inspector Vyas based on evidence. Sanjeev Bhatt's arrest is likely in this late 1990s period case. A criminal complaint was filed in 1996 by one Sumer Singh Rajpurohit, an Advocate practicing at Pali, Rajasthan against Shri Sanjiv Bhatt, the then SP, Banask...Read More

Update: AMC team has started demolition of illegal extension in presence of police staff. The action is being captured in video by AMC and Police teams. Bhatt is present to witness demolition. Ahmedabad: Illegally constructed portion of dismissed IPS officer Sanjiv Bhatt's bungalow near Drive In road here will be demolished finally. The Supreme Court has denied any relief to Bhatt in this case. Bhatt lives in Sushilnagar based bungalow on Drive In road. In year 2011, his neighbour Pravin P...Read More