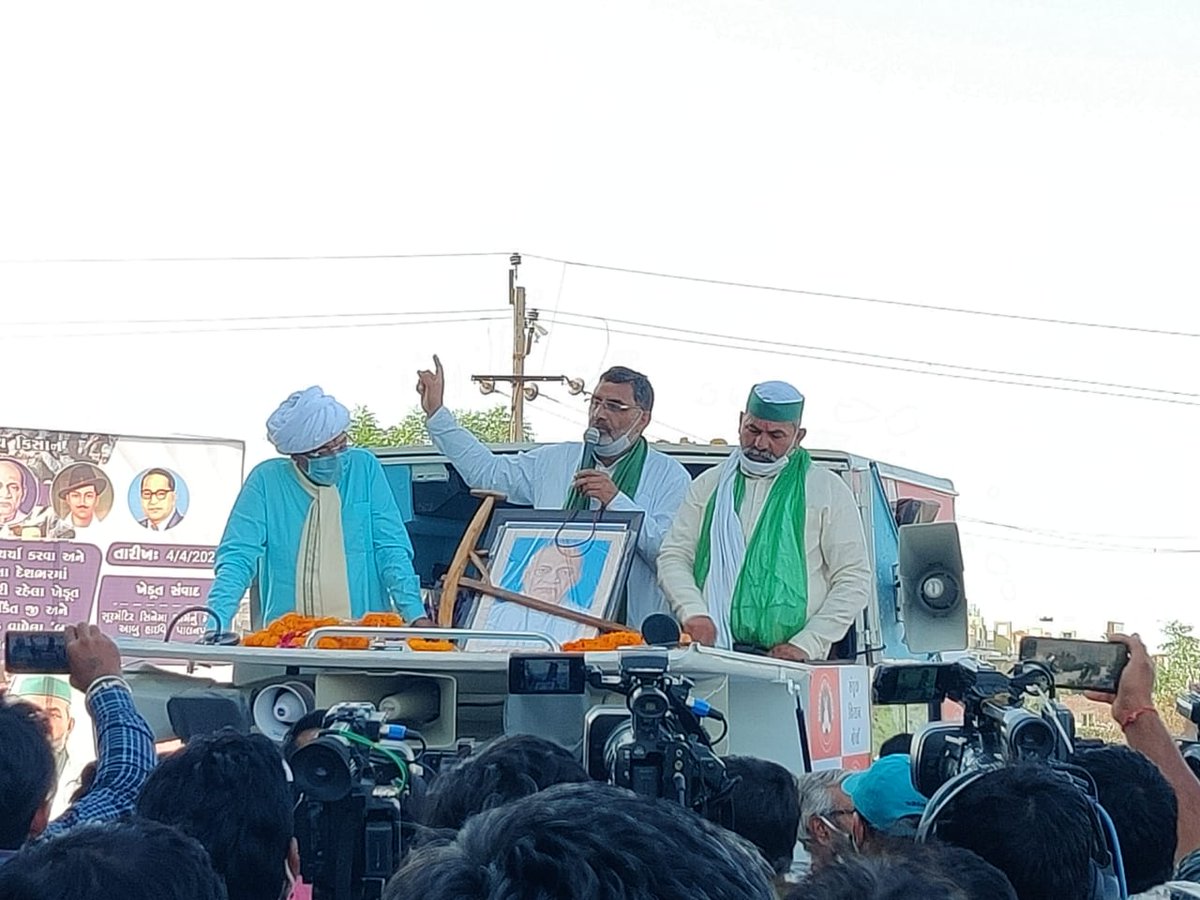 Palanpur: Bhartiya Kisan Union (BKU) leader Rakesh Tikait today kicked off his two-day tour of Gujarat for campaign against the three Central farm laws. However contrary to hype, Tikait actually received timid response. His two scheduled programmes at Ambaji and Palanpur today could see presence of only around 100 odd persons including lot of onlookers on roadside. Tikait fails to evoke response on first day of his Gujarat tourhttps://t.co/kGVt2RCHfp pic.twitter.com/gUJvceHvs7— DeshGuja...Read More

Gandhinagar: Former Gujarat Chief Minister Shankersinh Vaghela today released a video statement and said he is ready to join Congress unconditionally if he is invited by central leadership of Congress party. Vaghela claimed he was requested by Congress cadres to return to the party when he joined funeral procession of late Congress leader Ahmed Patel last year. Vaghela said he met recently with Congress leader Bharatsinh Solanki, but the meeting was only about conveying condolence on passing awa...Read More

Gandhinagar: Former Chief Minister Shanekrsinh Vaghela (80) has isolated himself at his residence 'Vasang Vagdo' in capital Gandhinagar after detected as Covid-19 positive in laboratory test. Vaghela aides informed that he has mild symptoms and therefore he has chosen to stay at home and get Covid-19 care. However a final decision on whether to go for hospitalization or continue home-isolation will be taken tomorrow. DeshGujaratRead More 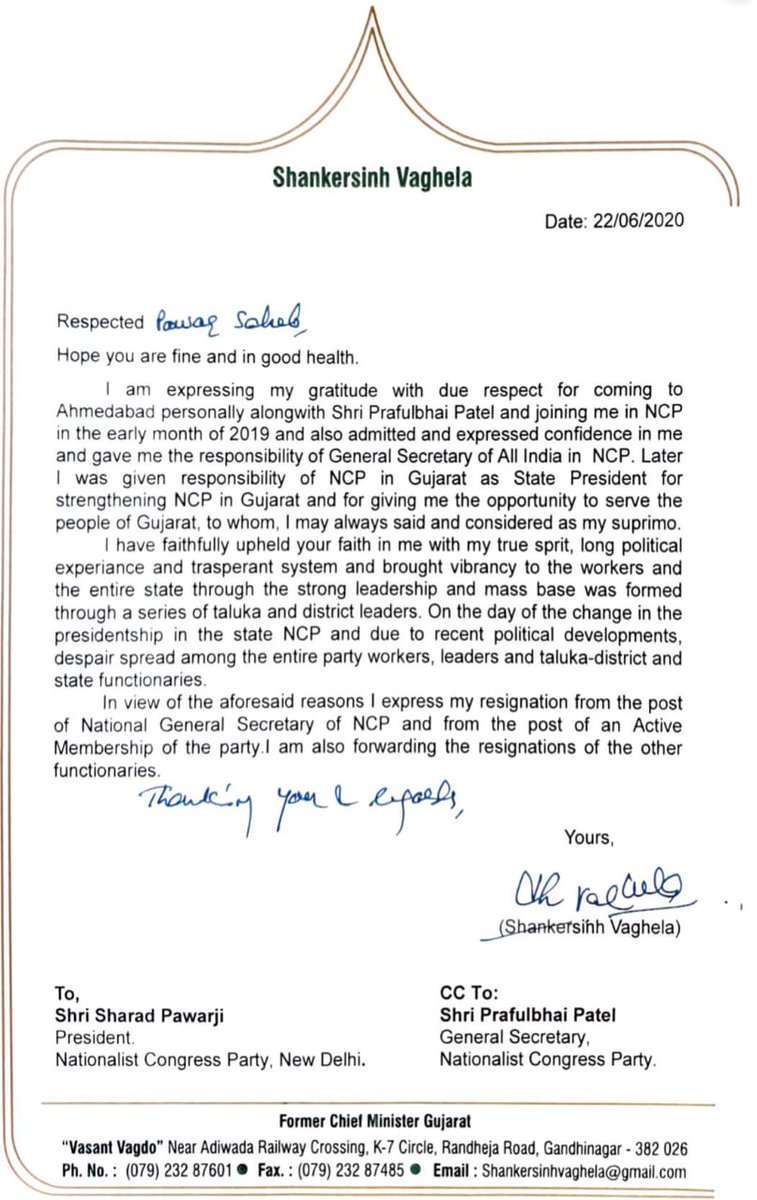 Gandhinagar: All India general secretary of Sharad Pawar led Nationalist Congress Party (NCP), Shankersinh Vaghela has tendered his resignation from the party. Vaghela is former Chief Minister of Gujarat. He has been with BJP, Congress, Rashtriya Janata Party, MahaGujarat Janata Party, Jan Vikalp Morcha and All India Hindustan Congress Party before NCP. Vaghela had in a recent interview said that he was removed from the post of Gujarat State president of NCP without his knowledge when he was...Read More

Wouldn’t continue in party that is into match fixing: Vaghela after his removal from State NCP chief post

Gandhinagar: After he was removed from the post of president of Gujarat unit of Nationalist Congress Party, former Chief Minister Shankersinh Vaghela said in a press conference that he would not stay in a political party that is into match fixing. Vaghela said he had told NCP leader Praful Patel over phone call that he would come to Mumbai and meet him, but by the time he (Vaghela) returned from a visit to Kevadiya Colony, he learned that he was replaced as State NCP president by former NCP MLA ...Read More

Gandhinagar: Former Gujarat CM and union minister Shankersinh Vaghela who had joined the Nationalist Congress Party (NCP) on January 29 this year has been appointed as the new state president of the party. 78 year old Rajput leader had been inducted in the party as its national general secretary earlier on. A letter of appointment by NCP president Sharad Pawar received by Vaghela's office said that he would replace Jayant Patel alias Boski who has now been eleva...Read More

Suggested high-command to field Vaghela against Shah in Gandhinagar, got a go-ahead:NCP Gujarat chief

Ahmedabad: Gujarat President of Nationalist Congress Party (NCP), Jayant Patel alias Jayant Boski today said that he has suggested the party high-command to field a party general secretary and former CM Shankersinh Vaghela against BJP president Amit Shah on Gandhinagar Loksabha seat. Boski said that Vaghela had earlier won the seat (in 1989 as BJP candidate) and his residence was also in Gandhinagar. 'I have talked to the party high command this morning and he had given me th...Read More 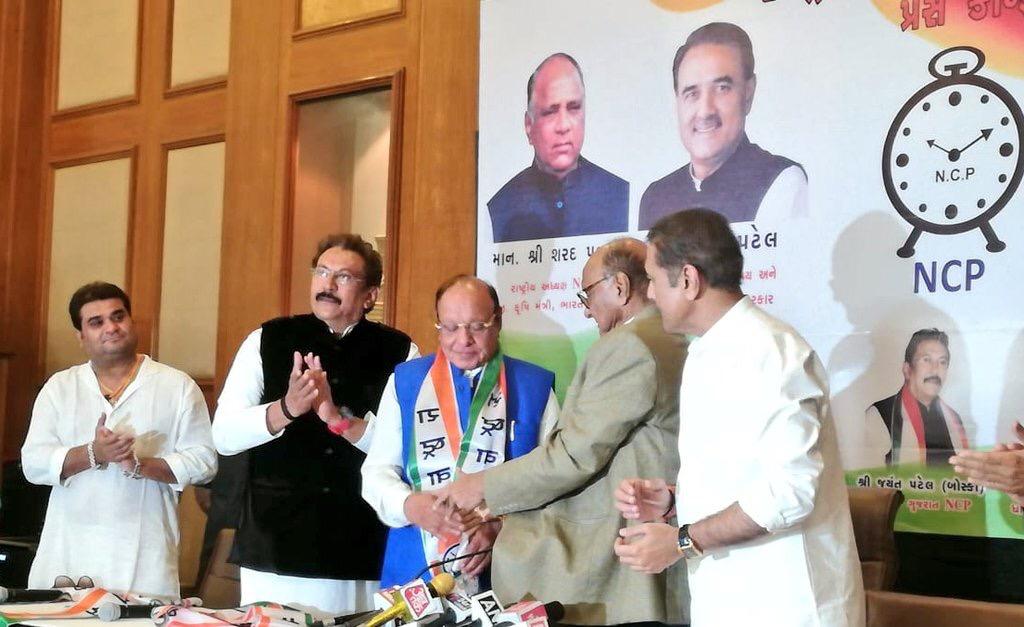 Gandhinagar: Ahead of upcoming general elections of Lok Sabha, former Chief Minister Shankersinh Vaghela today joined Nationalist Congress Party (NCP) in presence of NCP chief Sharad Pawar and Praful Patel at Hotel Ummed in Ahmedabad. Shankersinh was declared NCP's general secretary. On this occasion, Sharad Pawar interacted with media persons in detail on this occasion. Shankersinh had worked in BJP and Congress in the past. He had also formed his own party and front Rashtriya Janata Party ...Read More

Shankersingh Vaghela to contest LS polls from a North or Central Gujarat seat after joining NCP:Boski

Ahmedabad: Former Gujarat CM and union minister Shankersinh Vaghela who would formally join Nationalist Congress Party (NCP) on January 29 here in presence of party president Sharad Pawar, would also contest Loksabha election on party ticket from a central or northern region seat,' party's state president Jayant Boski said today. He said that the veteran leader would contest the LS poll on NCP ticket for sure. 'We are in to discussions with him about the selection of seat for hi...Read More

Ahmedabad: Former Gujarat CM and union minister Shankersinh Vaghela would formally join Nationalist Congress Party (NCP) on January 29 here in presence of party president Sharad Pawar. 78 year old Rajput leader would be taken in the party as its national general secretary of NCP. State President of NCP Jayant Boski today confirmed this. He said that the preparations for the workers meet here on January 29 during which Vaghela would join the party were on. Pawar and...Read More